"Too much gender for one man to handle, when I all need is a one-night scandal."
--Akon...sort of

Let me tell you, pop-cultural blogs are eyestrain inducing, since we have to read or watch things and then blog about them.  Recently I got a job (hurrah!) which for some reason made me get an eye exam.  A few years ago, I was told I had 20/15 vision, which is "better" than 20/20.  But now, when I covered up one of my eyes, everything was blurry!  So yeah...it seems like the universe is conspiring against me when it comes to blogging more regularly.  Although now I'm actually using a wireless keyboard, with my back to the screen.  God bless technology.  Well, sort of.

Anyway, this is the long way of saying that I'm sad I have to take frequent eye-breaks from my reading of Whipping Girl (which I can't yet do with my back to the book).  It's really fierce and intelligent.  Julia Serano is very persuasive; if I was having a debate tournament, I would definitely want her on my side.


One point the book has made so far is that rather than "smashing the gender binary" (which I've admitted I would like to do), what we really need to smash is gender entitlement.  I don't want everyone to be androgynous, which is how, Serano tells me, "smashing the binary" can be interpreted.  What I want is for the binary to not be so rigidly policed, so that people aren't judged for their gender expression, however they identify.  The gender binary has caused me a lot of pain, to the point that I don't want to be associated with it.  But when I speak about my distaste for the binary, I speak for myself alone.

This book might also illuminate to me why, while I feel genderqueer, I can't give up identifying as a woman.  I see myself as a "genderqueer woman".  Maybe this is too contradictory to be accepted by most, even though some would say it's possible to have more than one gender.  The truth comes out in my discomfort with being referred to as a woman alone, by people who aren't aware of my complicated feelings about my gender.  However, I am treated as a woman.  My femininity is silly and frivolous, and my masculinity is some sort of aberration because it co-exists with my femininity.  But why this scarcity mentality when it comes to gender?  I want it all...the gender I was assigned/raised as, and then some.

(PS to Fellmama-- There's PLENTY more to discuss about this book, if you're game...I haven't even gotten into the feminism parts at all.  I'd be interested to know your thoughts!)
Posted by Ily at 7:06 PM 2 comments:

TW: The F-word, British for cigarettes

Hello!  It's been a while, hasn't it?  And it's been an especially long while since I've done any book reviews.  This weekend I picked up a book called Why Are Faggots So Afraid of Faggots?  The subtitle is important:  "Flaming Challenges to Masculinity, Objectification, and the Desire to Conform".  I'd read the other two anthologies by Mattilda Bernstein Sycamore (Nobody Passes and That's Revolting), and enjoyed them, so I wanted to give this one a try as well.  I'm only on the second essay, but I can tell that the book is going to be educational and thought-provoking (although, it should be said, some of the content is sexually explicit, if that bothers you).


The first essay is about a cruising website called Dads and Lads.  Now that, I cannot relate to, but it did have some things to say that mirrored my own experience with online dating:


Worse yet, [the dropdown menu] suggests there's something wrong with anyone or anything that doesn't fit into those clear-cut, self-explanatory, "natural" options.  Sure, you can express in your profile's personal statements the scope of your sexual tastes and practices as fully and with as much imagination as the text field's character limit will accommodate.  But when you first encounter that dropdown, when you first look at the choices available and note that there are none with which you cleanly correspond, there is a moment of creeping doubt, of uncertainty, of a nagging sense that there is something wrong with you.  You should be one or the other.  (D. Travers Scott, "Imagining a Faggoty Web", 6)

The example of this humble and by now much-maligned dropdown menu is an illustration of how the web is not neutral.  The technologies that constitute the online experience did not appear out of thin air or descend from Olympus as gifts from the gods.  They are not separate from culture, somehow innocent and pure, but as deeply intertwined with culture as an episode of The Hills.  The design and functioning of online technologies is far from immune to racism, sexism, homophobia, and other social ills.  (7)

It hadn't really occurred to me that people with more well-known orientations might have the same dropdown menu problem that I do (apparently I haven't been spending enough time on Dads and Lads).  But dropdown menus seem to function similarly to those pants you try on in the dressing room.  They don't fit, so you must be too fat.  We seem to have this habit of blaming ourselves first, and once we've done that, it can be hard to see other options.  If you want to be pissed off about dropdown menus, I'll stand behind you.  It might seem "small", but you have a right to be frustrated about people who will sacrifice human diversity for some dating algorithm.

Although they may be different from my own life experience, reading these sorts of anti-assimilationist queer accounts often feels very refreshing to me.  I feel like asexuals, myself included, are often hesitant to take up space.  Like the "flaming faggots" in this anthology, we're often told that no one wants to hear about our sexuality.  With gay men, the perception is that there's too much to tell, and with asexuals, there is presumably not enough.  I would like to be flamboyantly asexual, although I'm still trying to figure out what that is.  Books like this remind me that there's value in that attempt.  As the introduction states, "Existing simultaneously outside queer and straight norms is liberating and constantly exciting in ways I had never anticipated".  This sense of liberation and excitement is what I wish for us.

It's been almost a year since I first decided to be kinder to myself. I had been, as bell hooks puts it, an "emotional terrorist" (to myself) for much too long. I've written before about why self-love is important (check the tag), and I think it's especially important for people who are often told that there's something deeply wrong with them (like asexuals). The #1 thing I've learned about self-love is that it's a practice. It's not like loving another person, where one day, you might suddenly realize "I love them", and then from that point forward, you experience that love. One thing I like about yoga is that in classes, the teachers often refer a lot to "your practice", emphasizing that yoga is more of a process than something goal-oriented (like being able to do a certain pose).  Self-love is like that.

For years, I've felt like I was fighting in an army, constantly trying to improve myself, but in some way, also at war with myself.  I thought that if I improved myself enough, I would like myself.  But now I see that it's the other way around.  "Negative motivation"...you know, stuff like, "Work harder, you lazy slacker!" has never worked for me, and never will.  Even if it "works" in the moment, you end up internalizing a lot of truly crappy ideas about yourself.  I had the idea that if I didn't keep myself "in line", I'd somehow devolve into accomplishing nothing.  But structure, which I need in order to achieve my goals, is not the same as having a mini-drill sergeant inside my head. 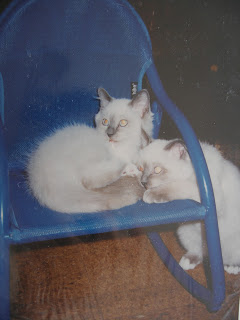 I also learned some lessons from cats.  I love animals in general, but definitely have a soft spot for cats.  From ages 6-19, I had a cat names Shadow.  As a child, I had few human friends.  Shadow, who would greet me at the door and then follow me around the house, helped me feel less lonely.  However, he definitely had an attitude problem.  He chewed up a large quantity of my clothes, had a habit of biting people's noses, and would pee on objects that had foolishly been left on the floor.  Every night, he would commandeer my pillow, leaving me with only a few square inches to put my head.  But I didn't have the heart to move him.

Sometimes I would get pissed off at Shadow...chewing my favorite sweater was a memorable misdeed of his.  But, it was hard to be mad at him for more than a day.  I wasn't in denial of his faults (some of them were even kind of hilarious) but I loved him anyway.  For me, it was easy to love Shadow unconditionally.  It's much harder to love myself that way, but it's what I'm aiming for.  Thanks, Shadow (and fellow bad cats Smokey, Steve, Thomas, and Rosie).

This is getting long, but I wanted to say something about the phrase "Self love is radical!"  I've heard it a lot, but it's never really explained.  If it is indeed radical, then what makes it so?  Maybe I'll try to do this in a future post.
Posted by Ily at 5:09 PM 1 comment: