This post is for the Virgin!Roar feminist blog carnival.

If I said I was a 26-year-old virgin, what responses might I tend to get? Pathetic, lonely, unattractive, repressed, super-religious, weird, or just hopelessly uncool. Maybe my fate is terrifying, unfathomable, or even worse than death. After high school, no one really asks "are you a virgin?" anymore. But if it stopped mattering, there wouldn't be all these negative stereotypes. Luckily, I have a handy excuse: I'm asexual! No sexual attraction to anyone! So it's totally okay for me to still be a virgin! Right, folks? Right, folks?

In my rush to neatly explain my virginity though, maybe I'm doing a disservice to all the other adult virgins out there. We shouldn't feel pressured to provide reasons in a quest to convince others that our choices are valid. It can be hard to own a status that some people may consider embarrassing, but then again, it will always be embarrassing unless people own up. Whether we were "too busy" or "career focused" or "waiting for the one", we just did not feel like having sex.

I wanted to answer the question "is virginity my choice?" but gave up in frustration. The usual reasons why people have sex--romantic love or sexual attraction--don't apply to me. There is no personally relevant reason for me to have sex, although this might relate to my chosen priorities as much as my asexuality. I want to avoid sexual pressure, I don't want to be the subject of someone's desire, and I don't want to engage in sex as a means to power or an expression of gender roles. You know those feminists that people tend to be scared of, who bandy around stuff like "heterosexual sex is oppressive?" Well, I think that any form of sex can be oppressive, or not, depending on the people and situation. Sex of any kind would feel oppressive to me personally, outside of a very narrow range of hypotheticals that I am unlikely to encounter. This doesn't mean I'm repressed. To me, the most "traditional" sex is also the most unappealing. Nor am I against anyone else having sex. As they say, do you.

If being a virgin was so awful, I could find a sexual partner. But virginity is not so bad, and despite what this post might convey, it's pretty much irrelevant to my personal identity. Having sex for the first time is not a major rite of passage in my life, which would be the factor giving virginity much of its meaning. I would guess that by our late 20's, most people who really wanted sex have found some way to have it. So virgins, as we get older and fewer in number, might get more content with their status rather than more frustrated. That's been my own experience, and it's the complete opposite of what the media portrays. At 2o, I was confused and distressed by my lack of sexual experience, but at 26, I know that for me, this is normal.
Posted by Ily at 12:14 PM 24 comments:

Totally Romantic! And yet, not!

Reading some thoughts on sensuality, I realized that what sensuality is for the physical, romance is for the mind. When you're smelling a flower, sensuality is the smell of the flower, the pleasure that it gives you, and your mindfulness of that experience. Romance is the emotion that the flower brings about, the other places and times that it might transport you to. While sensuality is a full experience of a present moment, romance, in a way, is an escape. It transports you from the drudgery of the everyday, making a simple moment into something you might always remember. Romance is the act of imbuing a sensual moment with special and personal significance.

I feel like I finally understand why someone would fly to Madrid just to weep in front of a painting. She wasn't crying because the painting was beautiful or well-executed. She cried because the painting had become a repository of emotion for her, and to see it brought all those feelings to the forefront. Whatever the emotions, they were ones she wanted to feel. Romance was whatever made her choose that particular painting as the most significant one.

So while I'm barely romantic in the asexual sense, I'm romantic in my own conception. If romance can be genuine rather than Hallmark-holiday, and freely felt rather than foisted upon us, then I have no qualms with it. I'm more interested in romance itself than in romantic relationships, which is why I was able to enjoy having an unrequited crush-- something many people would find painful. So while I'd consider myself a romantic, it's unlikely that at any given time, there's another person who I specifically want to be romantic with.

In asexual discourse, romance is often described as an analogue for sex. This is what gives a logic to the aromantic/romantic distinction. While asexuals are some of the few people who don't conflate sex and romance, we often talk about romance as if it is to us what sex is to everyone else. However, I don't see romance as a parallel to sex. I'm not the romantic equivalent of an asexual with a libido directed towards nothing, because I would guess that to me, romance is more significant than libido is to that asexual.

Dictionary definitions of "romance" are so circular, so I feel happy that I was finally able to come up with my own definition that makes sense to me. Whether it will resonate with others, I'm not sure, but I wanted to put it out there.

Email ThisBlogThis!Share to TwitterShare to FacebookShare to Pinterest
Labels: romance

That's not a value judgment, but a small piece of character development from the show Lost. When it originally aired, I got up to season 2. Now I'm re-watching it (although I'm close to giving up), I've reached season 4 (spoilers for seasons 1-3 are to follow), and somehow I'm finding it much harder to suspend my disbelief. This post from Shakesville comes to mind:

Although I love Lost with the fiery passion of ten thousand suns, that not a single one of the female characters on the Island has ever, in all her interactions with people who all started out as total strangers, faced even the faintest threat of sexual assault is an absurd omission. The only reference to sexual assault that I even recall on the show is when one female character refers as the "rape caves" to an area where another female character is abducted (though she is not sexually assaulted). The female characters routinely find themselves isolated with unknown men, many of whom are violent and unethical, but never is there a suggestion that the women would be in any particular physical danger separate from their male allies.

(It's a short post, so I recommend reading the rest.) While Lost is full of plot confusions, the characters' personal hygiene habits are even more baffling to me. Although the women aren't trekking around in makeup-caked faces, where do they get hair products? How do they shave their legs? And of course, why would anyone have consensual sex on a "deserted" island where there is no birth control and the one doctor is constantly in danger of being killed? Sure, people do crazy things in moments of passion, but I doubt many women would welcome the possibility of pregnancy on the island. Also, anyone willing to have sex with Sawyer without a condom is a damn fool, as he himself might say.

So how does Lost deal with these inconsistencies? Why, by killing many of the women who do have sex. It's that old horror-movie adage moved to the South Pacific. Here is a hopefully-accurate catalogue of people who've had sex in seasons 1-3, and their fates so far:

Sayid & Shannon: Shannon is killed in an accident, Sayid is still alive.

Sawyer & Kate: They're both still alive, but after she has sex with Sawyer, Kate becomes noticeably more annoying.

Hurley & Libby: Okay, they didn't have sex, but apparently, the sheer prospect was viewed as too disturbing (desexualization of fat characters?), so Libby was killed before they were about to depart on a romantic picnic.

Sun & Jin: They're both still alive, BUT Sun becomes pregnant. And she's told that all pregnant women who conceive on the island are doomed to death. I'll see how that one pans out.

Bonus: In a flash-forward that takes place in Berlin (early in season 4), Sayid and a woman have sex, they shoot each other, and only Sayid lives. He's like the Typhoid Mary of sex.

Note-- You can kiss on the island without anything bad happening to you. Thank goodness. (Also, pleeeze don't tell me how the show ends...although honestly, I doubt it's going to make much sense anyway.)
Posted by Ily at 12:39 PM 4 comments:

Now, I'm just going to go with an instinct here: I think asexuals are into Anglophilia. (Doctor Who, tweed, Alan Rickman, Sherlock Holmes?) I don't think you can be a -phile for your own country, so English readers might have to sit this one out...sorry. (I don't know if Anglophila specifically refers to England, or whether it applies to the UK in general; please forgive me for that.)

America has always been a country of escapists, and certain faraway places tend to capture our imaginations. England, Japan, India, and France seem to be eternal favorites among certain subsets of the population. Why would asexuals like England in particular? Maybe it's because we can somehow relate to more of their character creations, or because it seems to be the biggest hot spot of asexual activity in meatspace, a title it's seemed to hold for quite a few years now. Or maybe we just think that authentic Cadbury chocolates are better than sex. I don't think I'm truly an Anglophile myself, although I do have a soft spot for the place, gained from my study abroad experience and the myriad English/Scottish references of indiepop music. While I'd love to revisit England someday, I know that plenty of English people are as dissatisfied with their country as some Americans are with ours. But that's not really the point of --philia, is it?

Some Habits of the American Anglophile in its Natural Habitat: 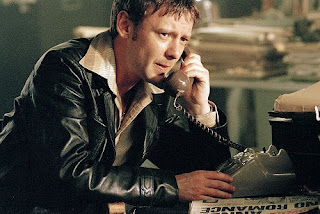 [Image: John Simm isn't quite sure what to make of your Anglophilia.]

I wonder...can you tell something about people based on the countries they -phile over? I sense a personality quiz in the works. If I was forced to make such a quiz, I would say that the Anglophile is someone who may be uncomfortable in their own culture, however, they still crave familiarity. If they were into trends, they'd say something like, "Well, this week I'm really into Cambodia", but the Anglophile remains loyal throughout the years. The desire for change and stasis at the same time--This is the dilemma of the Anglophile.

(As far as the personality quiz, recently I got a package in the mail and was enchanted by how cute the box was. Something about its size and shape was just so...kawaii! I wanted to cuddle it. So I had to ask myself...am I secretly Japanese? Well, apparently the official line in Japan is concern over their low birth rate. They might need to take in lots of foreigners! Those of you with a discerning eye for design and a love of soba might want to consider that.)
Posted by Ily at 4:58 PM 10 comments: