In Relocations, an awesome book, Karen Tongson writes about "remote intimacy", a term she credits to Jennifer Terry.  (Terry defined it as the "transmission of sentiments through designed uses and creative appropriations of telemediating devices".)  Wish I had page numbers, but I read it as an ebook and every page was Page 1.  Ain't technology grand?  You've probably experienced remote intimacy, even if you don't know the term.  The classic example is listening to a favorite song and feeling like somewhere out there, another person is listening to the same song and loving it, too.  It can also be experienced in groups, as in that scene from The Perks of Being a Wallflower that launched 10,000 "infinite" tattoos. The kids in that book, who presumably live in some uncool suburb, listen to the Smiths together and "feel infinite".  (The Smiths seem to have launched a disproportionately high number of remote intimacy moments.)  Tongson writes:

"...Listening as remote intimacy brings people, things, and concepts together, even if suburban space and time dictates their dispersal and isolation."

and in greater detail:

"In a pre-digital age, remote intimacies were practiced through the shared consumption (or some would say overconsumption) of broadcast television and popular music, as well as by "hanging out" live, at differently situated chains or even at amusement venues like Knott's [Berry Farm, a southern California theme park].  Sometimes the resonance of these activities and of these shared popular objects is only discovered belatedly, thus recreating intimacies in the present based on the shared, remote gestures--some experienced in isolation--in the past.  I would venture to describe such asynchronous echoes as remote intimacies across time."

Remote intimacy is especially important to the suburbs, because it can take away the inferiority of being in "a suburb of [some larger city]", allowing people to connect with faraway places that might have more in common with their own.  For instance, Tongson describes how music connects Birmingham, England with Riveside, California.  By identifying with a place like Birmingham, you can escape the feeling of living in a "lesser version" of LA.

But remote intimacy is older than this implies; predating recorded film and sound.  In her notes to the book, Tongson uses a quote about how morning prayers connect people with millions of unseen others doing the same thing.  It's one reason why these rituals are so powerful.  You feel remote intimacy with people across time (because your ancestors did the same thing) and in the present time, with people across the world.

Of course, the internet has caused remote intimacy to take up a much more prominent place in many of our lives.  The interesting thing is, Tongson never says that remote intimacy is an inferior copy of other intimacies, or that it is unhealthy in some way.  (This is how people alone in their rooms with music or the internet tend to be perceived.)  To Tongson, it is a way through which people fight isolation, rather than a way to become more isolated.  When talking about intimacy, relationships are always privileged, but they are not the only place to find intimacy.  I think it would be hard for most people to get by on remote intimacy alone.  But these little moments of connection?  They matter.

The most amazing event in history!

While riding the London tube, I saw this advertisement for an online dating site: 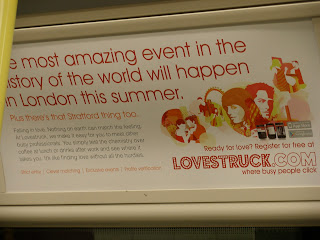 It reads: "The most amazing event in the history of the world will happen in London this summer.  Plus there's that Stratford thing too.  Falling in love.  Nothing on earth can match the feeling."

I saw the ad multiple times during my stay in London, and had some time to think about it during long tube journeys.  It plays on a common trope in American (and obviously, British) culture--that falling in love is a completely unique and rarefied experience.  There is nothing else like it.  I've always felt compelled to say that I "fell in love" with music, maybe to show that I do experience a full range of emotion.  Although, maybe I don't, and maybe that's fine.  I can find people attractive, have crushes and romantic feelings, and love people, but I have never in my life felt obsessed with another person.

But we all have certain things we can't experience.   For instance, I don't have synesthesia.  Since I first heard of synesthesia, I've thought that having it would be very interesting (although I know it can be problematic for people who have it).  However, no one places value judgements on people without synesthesia.  People who don't fall in love, though...that's another story.  Most people seem to accept the fact that some asexuals don't fall in love, but non-asexuals who don't fall in love tend to be portrayed as either callous manipulators or immature people who are scared of commitment.  In asexual visibility literature, it is often emphasized that asexuals can fall in love "just like anyone else".  I think this just perpetuates the idea that "falling in love", out of all other emotions, is put on a pedestal, and that people who aren't ace all fall in love (which is untrue).  No one ever says that "asexuals can make friends just like anyone else".  (And this might actually be relevant as well, since on coming out I've been asked if I prefer to be alone in all cases.)

While I don't have the authority to talk about falling in love with someone from personal experience, I can speak to the messages that I hear about it.  Whether or not they're true, we all hear them, sometimes every day or more, and repeated exposure to ideas affects us.

The idea that people in love recede from the larger world is problematic.  It relates to the idea that we are all broken up into completely independent nuclear family units, and this kind of thinking has really had a negative impact on social policy in America.  I don't think it's a good thing that people in love are expected to completely withdraw from their friends, communities, and families of origin.  It's not good for the people in the couple either, as their support networks may no longer be there once the honeymoon period is over.  Being in love may feel like being on drugs, but people are also encouraged to act like that's the case.  Back when marriage was largely a financial arrangement, did people fall in love like they do today?  Did they experience the feelings but just ignore them?  Maybe they had "falling in love" feelings towards friends, as described in Surpassing the Love of Men.

Right now I'm listening to a totally unrelated book called The Lost City of Z, which is about explorers in the Amazon (spoiler: they're racist).  Some indigenous people were described as being so far from civilization that they "didn't even have a concept of romantic love!"  It was like that fact was the ultimate exoticism.  But to me it makes no less sense than our society does.
Posted by Ily at 3:27 PM 2 comments: