The people who come to my mind first when I think of great friendships for the ages are Elizabeth Cady Stanton and Susan B. Anthony. Either of these women would be great role models on their own, but together, they accomplished much more than they would have been able to do individually. As key players in the struggle to get women the vote, they had different strategies and opinions, different strengths, and sometimes disagreed on the best ways to do things. But they were able to work with their differences in a way that strengthened them as a pair.

It’s also worth noting that while Cady Stanton was married with children, Anthony never had children or married. However, these lifestyle discrepancies didn't function to tear them apart. While Anthony traveled, Cady Stanton did research at home. In a long-ago post, I wrote about Anthony and our society’s changing beliefs on spinsterhood. More recently, I watched a documentary on the friendship between Stanton and Anthony and the work they did, and this minor detail stood out in my mind: Anthony’s frustration at Stanton at having yet another child when they had important work to do in the suffrage movement. Anthony said something like, “I can’t believe you’d commit yourself to all that work [of raising a child] just for a few moments of pleasure." I couldn't help but think that this was a pretty asexual thing to say...or maybe just ahead of its time. Cady Stanton had this to say about Anthony:

"Miss Anthony's life is a lesson to all unmarried women, showing that the love-element need not be...centered on husband and children. To life for the principle, for the triumph of some reform...--to be wedded to an idea..." 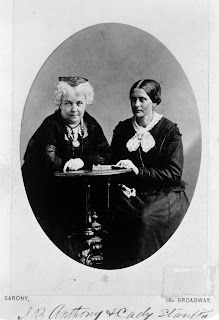 They met in 1851, introduced by a mutual acquaintance in Seneca Falls, New York. Their first action together was to start a womens' temperance society, the first of its kind. They were friends until their deaths: Cady Stanton in 1902 and Anthony in 1906. Much more than associates, it seems as though the two women had a great love and respect for one another. "It seems impossible-- that the voice is hushed that I longed to hear for fifty years", said Anthony on the occasion of Cady Stanton's death. Sadly, they didn't live to see women get the vote, but the foundation they helped build for our eventual suffrage, as well as the power they posessed for social change as a duo, is proof that there is no such thing as "just friends".
Posted by Ily at 7:38 PM

Email ThisBlogThis!Share to TwitterShare to FacebookShare to Pinterest
Labels: BFFs

That's totally the "Boston marriage" format, except one's married - brilliant! Ah, if only all womenfolk & peoplefolk would realize that a zest for life is all you need =)

Huh, it kind of is, isn't it? I know a lot of aces (myself included sometime), are worried that everyone they know will get married and abandon them, but Susan & Elizabeth's relationship shows that that doesn't have to be the case.

Isn't it ironic that Valentine's Day is also in February? xD

asexuality discussed on feministing! check out the comments on THAT one...