I just finished a book called Marrying Anita. Subtitled "A Quest for Love in the New India", it's the memoir of a journalist, Anita Jain, who leaves her life in New York to search for a husband in New Delhi, a city she is basically unfamiliar with as an Indian-American. To Jain's credit, her plan doesn't sound as insane in the book as it does when I explain it to you.
Let me say that I don't understand why so many people view marriage as a major, if not the most important, goal of their lives. I've felt this way as long as I can remember, but Marrying Anita really brought the disconnect home. I understand the desire to have a meaningful relationship, for close companionship. But I don't understand why marriage itself is so important. Maybe it's not a big deal, but I wish I could comprehend this thing that seems so crucial to a lot of other women. For me, during my heterosexual years, I always just assumed I would one day marry a man-- even though I had no idea how this situation would come to pass. Now, I'm not averse to marriage, but when people ask me "Are you going to get married?" the question doesn't seem to make sense. I mean, it's not like anyone's proposed to me lately. Isn't it sort of a moot point?

Sure, I would like to buy a house, adopt children perhaps, and find a person who enthusiastically accepts and heartily praises my efforts to make mixtapes for every situation. I guess if I was married (to a fellow music nerd), all this would be easier. But still, it doesn't follow to make marriage into a goal for myself. In Jain's case, being Indian, it's much more of a cultural expectation than it is for me. And according to her, the West is much more obsessed with sex than with marriage. But from my vantage point, we seem pretty damn obsessed with both.
There's one thing on which I can agree with Jain 100%: That sense of wanderlust; the idea that by changing your location on the map, your life might change, too. The idea that by leaving a place, you can leave behind all the frustration and dead ends you experienced there. Even though I hate change and start missing my cats if I'm away from them for more than a day, I constantly dream of seeing more of the world, of learning about other cultures and viewing other ways of life. Sometimes it's hard to tell if Marrying Anita is more about marriage or more about the New India. This is a good thing. Jain is living between cultures, and her fascination with India's rapid (and sometimes not-so-rapid) cultural changes is present on every page. 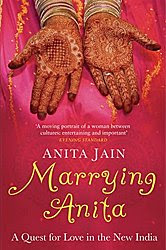 If you think you want to read this book, you might want to stop reading here, as I'm about to reveal the ending big-time!

The end of the book left me hanging. You're still wondering if Anita gets married. So I turn to the epilogue, and I find...that she doesn't. Yes, you heard that correctly. The protagonist of Marrying Anita never marries. I was awestruck by this, which goes to show how starved I am for stories about women's lives that deviate from common social mores. In the epilogue, Jain writes:

Who's to stop us if we decide to stay in a city for reasons as intangible as the glimpse of a Mughal-era tomb out of the corner of our eye as we sit in a noisy autorickshaw, or Chandra [Jain's maid]'s lovingly made morning lassis? Who's to tell us that the moments of grace we encounter in a place are not enough to keep us there-- that instead we need a context, a future, a father, a husband?

Even though I'm no fan of lassis, this passage, and Jain's further exploration of NYC vs. Delhi, resonated with me in a major way. I didn't know that the straight author of a book revolving around marriage could share my own asexual longings. Like Jain in NYC, I am oddly and constantly dissatisfied with my own major world-class city, a condition that few seem to share. Jain says, "It was different in Delhi. My ideas kept flowing from a pipeline that could not be stanched." I'm reminded of my lost love, London, walking slowly along the Thames in the borough of Richmond and coming to insights about my life (including that I might be asexual). What Jain ultimately found in Delhi, I wish I could also find. Maybe if I could better articulate my desires, I'd have a better chance of fulfilling them. But it's hard to find the words for more obscure forms of desire in a world where marriage is king.
Posted by Ily at 6:49 PM

I love the paragraph you quoted. I might try to pick this one up sometime.

I'm actually reading a memoir right now by a 91 year old woman, and she talks about the ending of her sexual desire and learning who she is apart from her sexuality. I'm finding it hugely compelling. It's called Somewhere Towards the End by Diana Athill.

Well, speaking as someone who WOULD like to get married someday . . . I think what many people want is not so much to be married, per se, as what marriage represents. For me, I'd like a loving, stable partnership, a house, a dog, kids--basically the American Dream minus the picket fence. That's what I really mean when I say "I'd like to get married." Now, if I could have those things without marriage, I'd totally go for it. But it's a convenient shorthand, I guess.

I can understand that, Lanafactrix. I wouldn't mind having many of the same things in my life. But, I'll try to explain my mental process that doesn't translate those things into marriage.

It might sound odd, but I'm not a fan of the kind of shorthand that you mention. It's kind of like how we use "relationship" as a shorthand for "somewhat serious romantic relationship". I think that while the person saying "a relationship" might have something more specific in mind, the most socially acceptable assumption tends to predominate for the listener. I know that marriage represents what you say it does to our culture, but I don't think it's necessarily an accurate portrayal of a lot of marriages. So I think that if we could take the time to describe what we want, instead of just saying "marriage", it would be a giant leap forward in communication.

Yes, definitely, Ily. I think lots of people don't really think about what marriage entails, anyway--when they use it as a shorthand, it's also a way to avoid articulating their desires clearly and thoroughly.

hi...
i read the book 'marrying anita' recently...and i'm in love with the book, its thoughts and almost everything about it. i feel it echoes exactly what i have in mind.i found your blog while googling the book. and i should say, i loved your post...perhaps because i feel the same way and its good to know someone across the world thinks like you. :) anyway, just wanted to let u know that i loved it! :)