Carolyn will be disappointed if I don't write about cougars, and I do try to give the people what they want. It would also be a shame to have watched the show "Cougartown" for nothing. If you haven't heard of "cougars", I'd be a bit surprised because they've been getting a lot of press lately. Cougars are simply older women who are dating younger men. Since the opposite (older men, younger women) has been going on since time immemorial, I really have no idea why we are suddenly so fascinated with cougars. Now that women can make as much money as men, and don't necessarily have to marry for financial reasons, why shouldn't we pursue men of whatever age we want? Of course, it's telling that when women date younger men, it gets a name and is pegged as a social phenomenon, unlike the reverse situation with older men. 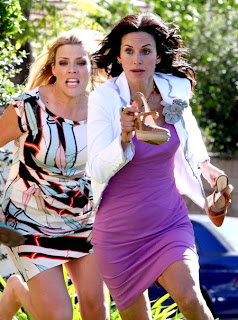 [Above: Courtney Cox (Jules) and Busy Phillips have hijinks on "Cougartown"]
The cougar phenomenon even got its own TV show on ABC called "Cougartown". I've been watching this show because I was convinced it would give me something to blog about; it did, but as you'll see, the meat (or tofu) of this post won't be about cougars at all. Anyway, the show is about a 40-something divorced woman (Courtney Cox) trying to "get back out there". Contrary to popular belief about cougars, she isn't having a ton of random sex. I guess that would be more HBO than ABC. In fact, there is only one younger man that she dates in the show, and he receives relatively little screen time. It's been a while since I've watched a half-hour show with commercials, and it's remarkable how little actually happens. For example, one episode concentrates on the efforts of the main character, Jules, to get her cranky neighbor to play a game of golf with her ex-husband. Although the cougar concept might sound titillating, "Cougartown" is actually pretty mundane.

I was sure I'd find something about "Cougartown" disturbing, and I did, but it had nothing to do with cougars. In the show, Jules' best friend is a married woman with a baby who lives next door. In one episode, this woman gives her husband a few cards that say "SEX"; he can use them for sex whenever he wants and she "can't say no", an arrangement she doesn't seem very happy about. Ah yes, the phenomenon of "gift sex". It's been discussed on AVEN before, where people generally seemed to think it was a bad idea. There are times for all of us when we just don't feel like having sex-- the difference is only that for asexuals, it's usually all of the time. I think using sex as a currency is just asking for problems-- isn't it likely that you'll resent unwanted sex, even if you're agreeing to it? For me, the concept hearkens back to the day when men would "expect something" from women if they took us out to dinner, bought us gifts, etc. Even if you're highly sexual and you've had sex with your partner 10,000 times, you should still be able to say "no" to sex whenever you want to, something that gift sex makes a lot harder and more awkward to do. 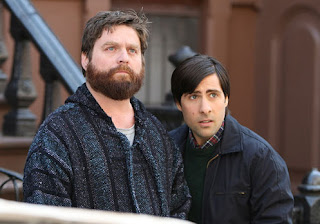 [Above: Zach Galifianakis (Ray) and Jason Schwartzman in "Bored to Death"]
Anyway, gift sex is something that is commonly explored in pop culture, usually for laughs. For example, in the current HBO show "Bored to Death", the best friend of the main character is dating a woman who rarely has sex with him, something he complains about in every episode. The only time they'll have sex is if the guy, Ray, agrees to jump through some sort of hoop, such as going to therapy or getting a colonic. All this couple seems to do is argue about and negotiate the frequency of sex. They aren't married, and they don't have kids-- since they both seem so unhappy, why are they even together? It really isn't clear. One might think it would be beneficial to asexuals that so many couples with disparate sex drives are portrayed in pop culture, since many of us contend with this issue. However, the story is always the same and doesn't offer very many alternatives. It's most often the man who wants sex, and he either nags until the women gives in, or they go through gift sex-related rituals. How the woman feels about all this is usually never explained. Maybe it's funny that a man would endure a colonic for the promise of sex with a chronically annoying woman, but if so, it's a joke I just don't get.
Posted by Ily at 5:43 PM

I haven't seen "Cougartown" yet but I wanted to add that there was an episode of the Daily Show where the term 'Redenbacher' was brought up as a name for older men who date younger women.

I think this needs to be a thing. Heh.

So, their relationship is like the plot of Lysistrata, only less awesome...
That's not so much offensive as stupid and unoriginal.

Wow, yeah. Gift sex = creepy and not okay. I hate the implication that it's owed to the person you're with.

You know it's funny to read this, because I was just sort of talking about this phenomenon with my mom (of all people). Actually we were talking about the priest/sex abuse thing. She's a converted Catholic; I'm an atheist ex-baptist. But religion does fascinate me, as does celibacy, which a lot of people think is weird but I don't. Anyway, the media attention I think gives the impression that priests abuse (sexually) boys in disproportionate number. But I happen to think that boy abuse gets more media attention than girl abuse, because it's a better story. But anyway, the idea of older people and younger people having sex... I don't actually like young people much. I think most of them are obnoxious. I am 31 and I do have a lot of grey hair (which I really like) but I know I'm not even very old. There are very few teenagers whom I would even want to talk to. And I would not want to have sex with someone I don't want to talk to. But it appears that some people do want to have sex with people they wouldn't want to talk to. And maybe that portion is higher for men than women. So therefore, the idea of men having sex with younger women is not unusual, but "cougars" is news. Or something. I dunno. At 31, I'm at an age when people can be 10 years younger than me and still be adults. I have always mostly been attracted to people at least my age, but I don't know if that will be true when I am 50, or 90 (if I live that long). At 90 almost everyone is younger. I don't think I could even entertain the idea of dating someone 18 or 20. But then again I am really reluctant to date at all. It seems imprudent, but well, so can be dating someone your own age.

But if a 40 year old wanted to date me, I might not have a problem with the age thing (assuming we were compatible in other respects - not likely). Maybe even 50. I have no idea. That's getting close to my parents' ages (65 and 70 I think). I have been friends with people my parents age though.

I guess if you can be a good friend with someone that's a good reason to be a romantic partner, if you are into romantic partnerships. But the weird thing to me is a lot of partners are not really friends. That's the thing that seems most weird to me about "the game".

I could maybe have a partner, but I can never play that game. But if I ever have a partnership there would be almost none of the stereotypical romance.

Agreed! That's all I can say.