I thought that before I leave on a trip next week, I'll post some old drafts that I have lying around the Blogger attic. This one was originally written in November, 2008:

I started this blog as a "response to pop culture". I didn't want to stand idly by while the forces of society just washed over me, a passive observer. I wanted to defend asexuality from those who would detract from it, and describe the gifts that we could bring to the general population. But,

[Disclaimer: This post is not in reference to any post or poster in particular, as I have seen many of the comments I am about to discuss over the years.]

On AVEN, there's usually some sort of discussion over the things people find objectionable about sex. Usually, I have no problem with this topic. I figure that if people can't talk about why they don't like sex on AVEN, where can they do it? I'd always feel fine reading these topics and even participating, until people mention how horrified they are by genitalia, usually that of the "opposite sex" (in quotes because the gender binary is lame). It's one thing if you don't want someone else's "bits" (as the Brits say) near yours, but to condemn all bits, everywhere? Anyway, extremely harsh appraisals of penises and vaginas themselves make me uncomfortable, and I thought I would investigate why that might be. 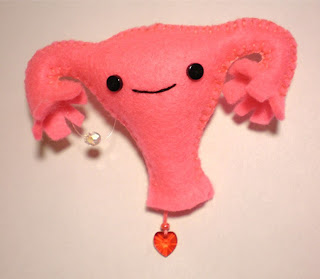 I don't know about anyone else, but I have a hard time forgetting the social and political history of our genitalia. For centuries, penises were where it's at. Freud thought all women wanted one, forgetting that what we actually wanted were the privileges that they afforded. People who I have a hard time understanding, like Judith Butler, will talk about the social implications of the "phallus", a concept that has more to do with things like power and independence than with sex. In the meantime, vaginas have come a fairly long way. Thanks in part to The Vagina Monologues, people are finally using the word "vagina" in regular conversations at a normal decibel level. I even remember seeing some sort of vulva puppet on TV. However, the reason people even make a vulva puppet is because a lot of us still have no idea what's going on "down there". Vaginas still aren't well understood by all of us. If a sexual male said that "vaginas are disgusting", I would honestly feel a bit scared. (While penises are not always safe from harm, vaginas are the victims of much more violence.) If an asexual person says the same thing, does it have a different effect just because the mindset is different? I don't think that an asexual saying "Vaginas are icky" is going to incite another asexual to rape someone, for instance. But, I do think that those comments contribute to a climate where women may not feel safe.

Even if you're asexual, you will probably have a vagina or a penis (I can't claim to know that everyone does). Hopefully, we're trying to be at peace with our bodies, and that includes our various genitalia. Even if the effect is unintended, I think that disparaging remarks about genitalia make that process harder for everyone.

This is not the only "objectionable" view that I see my fellow asexuals raise...I may describe others in future posts. Perhaps my sensibilities are just too delicate to spend time on the internet. But, to me, this brings up why meetups are so important as the future of asexual community. When we get together, we don't talk about how much we hate sexual people (for instance), we mostly talk about food. What do you want to be a part of our collective consciousness?

Thank you!!! This is one of the things I like least about AVEN, and it equal parts scares and exasperates me. There is a difference between saying "I don't like genitalia and I don't want to get freaky with it" and the kind of graphic, frequently misogynistic language commonly used to bash genitalia over there. AVEN is the website that basically represents the asexual community, so I think it is very important to call out its problematic aspects.

You are welcome! :-) I agree, there's a big, important difference between those two statements.

The uterus doll is cute simply because I would never think to own one! I also love how this doll increases awareness about issues of gender and genitalia... and this doll is just a wonderful example about how we can have fun with something as miserable as PMS.

Unrelatedly, there's a Frida Kahlo stuffed uterus available on Etsy, and for some reason it just seems perfect. I would buy it if it weren't $65, but alas.

I know, right? The stuffed uterus looks so cute and innocent, I couldn't get mad at it for giving me cramps...or at least, not for too long :-)

So I searched for the Frida Kahlo uterus doll and Oh. My. Gosh! It's brilliant! I think she would have appreciated it:

Ily, the same trend (not being comfortable with bits of self and/or others) was pretty apparent with a group I talked to in '05. There seemed to be a resentment of female anatomy simply because of the media stigma (tampons and pads mean tight white pants and dancing in flowery fields during one's period). The folks present who used menstrual cups were much less hostile about their anatomy though (my mindset changed as well when I switched)... Perhaps there's just a desire for everyone to stay fully clothed, though. Still, regardless of gender and orientation and reproductive bits - we're all human and there's no need for excessive hate of anatomy.