Lately I've been thinking about "ugly" and "beautiful". (More like, I spent one day thinking about it intensely--Jan 10th, according to the original post date-- then couldn't finish the post, so kept on thinking by default.) First there was this piece by Mia Mingus, which has been circulating on Tumblr. Some excerpts:

We all run from the ugly. And the farther we run from it, the more we stigmatize it and the more power we give beauty. Our communities are obsessed with being beautiful and gorgeous and hot. What would it mean if we were ugly?...What if we let go of being beautiful, stopped chasing “pretty,” stopped sucking in and shrinking and spending enormous amounts of money and time on things that don’t make us magnificent?...There is magnificence in our ugliness. There is power in it, far greater than beauty can ever wield...I would rather you be magnificent, than beautiful, any day of the week. I would rather you be ugly—magnificently ugly.

Then I read these posts by Definatalie (who is also an excellent artist!) Her concept of "ugly femme" is pretty badass to me, and it looks like some other folks are starting to run with it. It seems like embracing ugliness could be freeing, but I hesitate to label myself as such. For so long, I thought that my lack of conventional attractiveness was somehow causing my lack of sexual interest. And beauty is often moralized--ugly people tend to be those whom we dislike. Ugly tends to imply repulsion, and I don't think it pains anyone to look upon me. However, I appreciate the transgressive power of saying "I am ugly". Like "queer", it seems like "ugly" is a political label. Just like queer speaks to the pain that heteronormativity has caused, ugly speaks to the suffering created by rigid beauty ideals. It's another attempt to reclaim a phrase that has been used against us.

I am a person who mostly gets called "cute". I like wearing unusual clothes, so comments about my appearance are, 99% of the time, about my clothes and/or hair, rather than my overall beauty or lack thereof. Sometimes when I look at old paintings, I see a woman who kind of looks like me. But I don't see that woman in movies, on TV, or in magazines. Sometimes I think I'm beautiful, and some individuals might think so, but the societal juggernaut doesn't. We're told that "everyone is beautiful in their own way" and yet we're also told that in order to be beautiful we need to be thinner, more feminine, less hairy, have a different skin color, etc. Basically, the messages out there about beauty are confusing. Maybe I would have been considered a great beauty in 1812, or in some other culture, but that seems neither here nor there.

And when I do get called "beautiful", it's never in a context where I can appreciate it. It never matches up with my own concept of what's beautiful about my appearance or myself more generally. When I was around 12, I found myself alone in a room with the older son of some acquaintance of my parents'. He was a stranger to me, and I didn't have anything to say to him. But suddenly, he piped up with a comment about how beautiful I was. He could probably see the discomfort on my face, and guessed that I "probably wasn't interested in boys yet" (heterosexism starts early). Feeling vaguely afraid for my safety, I excused myself and went to hide elsewhere in the house. His statement may have been true to him, but it sounded so false to me. Whatever kind of beauty he was foisting on me in that moment, I didn't want it.
Posted by Ily at 11:37 AM 7 comments:

"At the end of his life, he went to Bolivia in search of the 'center that irradiates the energy of space', but he died in Peru, alone and in total poverty."
--Excerpt from a biographical blurb on Simón Rodríguez, a Venezuelan poet, from here.

"Oh no, not another learning experience!" --bumper sticker
Some people are prone to loneliness, and I've always been one of them. When I was younger, I was the stereotypical mildly autistic child who "yearned to connect with others--but didn't know how!" Now, my social skills are better, but I still tend towards loneliness. In the anime series Honey and Clover, one of the characters says that loneliness is like a tide, moving in and out in the course of one's life. A while ago, I said that I wanted to see more loneliness depicted in pop culture. Honey and Clover is one of the more eloquent depictions that I've seen. It manages to achieve a few moments of actual profundity. 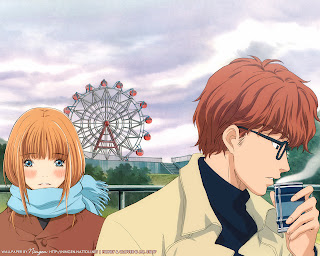 [Image: Characters from Honey and Clover]
The dominant narrative about loneliness is that it must be avoided at all costs, and that it might even kill you. I've found neither of these things to be true. It seems like loneliness is a cyclical, inevitable part of life, especially for people with certain temperaments. As a younger asexual, I was very concerned about being lonely due to my orientation. But the thing was...I'd been plenty lonely while I still identified as straight. It didn't kill me as a fake heterosexual, and it won't kill me as an asexual. I was worried about loneliness in the future. But it will come, and pass, and come again, regardless of my orientation.

When I read the blurb about Simón Rodríguez, I seized on the words "die alone", since that can be such a scary-sounding thing. But it didn't sound like his biggest problem. A lot of the poets in the compilation died in unusual/dramatic ways. Dying alone, one of the tamer ones, seemed oddly fitting. While there's a lot of joyful poetry, something about that medium just seems to correspond to loneliness. Loneliness, not to be confused with depression, is one of the primary motivators of my creativity. It makes me want to reach out and express myself, which I tend to do through writing. Lonely times, for me, have often been times of discovery. They're times when I have no choice but to look inside myself, and good things can come from that.

This post feels weird to write, and may feel weird to read. There's this American idea (although I doubt it's uniquely American) that bad feelings need to be completely obliterated in order for us to have satisfying lives. But I feel like this idea sets up an impossible goal that only makes us feel worse. Loneliness sometimes beats the alternative. In Hello, Cruel World, Kate Bornstein writes: "I hate being lonely, but loneliness would be a better feeling for me than, say, hopelessness. To my way of thinking, anger and loneliness are a lot closer to being free to live the kind of life that I'd want to stay alive in (95)". Of course, everyone experiences emotions differently. For instance, while many people enjoy feeling excited, I don't, because it feels too similar to anxiety. Most of us have probably felt lonely at some point. Do you think there's anything positive about loneliness?

(Here's a discussion on the topic that's already happened; it has some good thoughts and even an Aztec Camera reference! I'd still like to have our own, though...)
Posted by Ily at 9:06 PM 17 comments:

Whatever Happened to "People"?

So, I have something like 5 drafts of different posts, but I'm being a huge perfectionist about them. Sometimes I go through phases where everything I try to blog about sounds "weird" to me. Maybe some of you other bloggers can relate. Anyway, I'll try to get over that and post something anyway. As you know, nothing warms my heart like a detailed inquiry into the words and phrases that many people take for granted. "Falling in love", "relationships", and "just friends", for instance.

So here is a brief observation...a trend, if you will, that I've noticed since I've gotten involved with Occupy. Whenever folks want to be taken more seriously, they cease to be "people" and become either "families" or "men and women". For instance, I never hear about "keeping people in their homes", but always "keeping families in their homes". I don't hear about "union workers", but "union men and women". It seems as though social justice movements feel that folks will be more emotionally affected by "families". Why? Is it because everyone has warm feelings towards their family? (no). Or is it because families involve innocent children? (Aren't children also included in "people"?) The truth is, while everyone is part of some family, a lot of people live alone, or with people to whom they're not related. They also face foreclosure.

And of course, not everyone is a man or a woman. According to the Asexual Awareness Week census, a sizable number of asexuals have a gender identity that's somewhere outside the binary. While "men and women" has a more oratorical feel, I don't think it has any advantages over "people". So, I say, bring back "people" and include more of us, even genderqueer orphans.

Now, this might sound totally inconsequential, but little language changes DO have an impact on the public consciousness. Just ask Frank Luntz, who freaks me out and impresses me at the same time.
Posted by Ily at 1:48 PM 6 comments: