It's Asexual Awareness Week, and sadly, my screening of the (A)sexual film didn't work out. So I decided to observe the week by posting a different asexual-related meme (Asexual Cake, Sexually Oblivious Sherlock, etc) every day on my Facebook wall, along with some explanation of how it relates to asexuality. I believe in the adage, "If they're laughing, they're listening." So, is this raising awareness?

Is it annoying people?

YES. I'm trying to follow my own advice, which is to do visibility projects that you love. And I do love memes.

With a number of friends, I'm pretty sure they know I'm asexual, but not completely sure. I was hoping that posting every day about asexuality would put more people into the "completely sure" category, although at this point it's hard to tell. But, I've only gotten positive reactions so far, and that's encouraging.

I'm pretty preoccupied (oh God, I hate puns) by the Occupy stuff right now, so this is all you get at the moment...
Posted by Ily at 8:22 PM 1 comment:

Email ThisBlogThis!Share to TwitterShare to FacebookShare to Pinterest
Labels: Coming Out, confessions of love

And this relates to Spanx how?

An asexy friend clued me in to the fact that in her performance If You Will, Janeane Garofalo talks about being asexual. Of course, you know me, so I had to check it out (you can see it on DVD). And indeed, she refers to herself as asexual, partially as an attempt to dispel rumors that she's a lesbian. Garofalo says that she's been with her boyfriend for 10 years, and while they used to have sex, they no longer do. She also refers to herself as celibate, and claims that it allows her more free time to get things done (groan, I don't like this stereotype!). Actually, she plays into other stereotypes of asexuals, wondering if her lack of sexual interest was influenced by a religious Irish grandmother.

[Image: Janeane Garofalo performing If You Will]
But, some of us really do ask ourselves those kinds of questions. Garofalo doesn't seem at ease with her asexuality; it's as if she's working through it over the duration of the performance, but never reaching a conclusion. In short, she doubts, which a lot of us can identify with...wondering if we're broken, repressed, late bloomers, etc. She tells the audience that asexuality isn't a fear of intimacy, but a lack of interest. Still, she worries about being seen as cold and uncaring. This is one stereotype she tries to dispel, by bringing out a collage of puppy photos that she made. And, she may not have sex, but she does know a lot about mens' heels, their alleged dryness being a subject of much consternation to her.

You know how people say that earlier stand-up, like Lenny Bruce, just isn't funny anymore to a modern audience? Well...that's basically how all stand-up is to me. I'll find a couple of things funny maybe, but have no idea how the audience can be laughing at everything. That said, reviews of If You Will did seem mixed. I have to agree with the reviewer on Netflix who wrote: "This is dramady. Or a dark confessional with strong artistic merit but a bit of a downer. If you are expecting comedy you might be disappointed." So while I didn't laugh much, I did admire the way that Garofalo was open about her doubts. She doesn't simplify or try not to contradict herself, but just keeps talking, as if she and the audience have been friends for a while.
Posted by Ily at 8:10 PM 6 comments:

"When will my reflection show who I am inside?" --Mulan. Yeah.
*Edited to add: Since I submitted this post to the gender-themed Carnival of Aces round, I just wanted to clarify what my "thesis" was supposed to be: That those of us who don't quite fit the gender binary may have a harder time being read as adults in our culture, feeling like adults, or both. I don't think I made that as clear as I could have, what with all my complaining about looking young. Hee hee.*

Recently, I was at a community meeting where I was one of very few people younger than my parents' age. An older man approached me and asked me which school I went to. I said I didn't go to school. He asked, "Why, you didn't like it?" And I said no, I'd graduated. I get this all the time--"Are you in school?" It has been confirmed that I do have some kind of "academic look" about me. But I also get "What grade are you in?", implying that I'm in high school or younger, when I'm actually 27*. If you complain about looking young, you'll probably be told how lucky you are. But I didn't feel very lucky when, after making an important work presentation, I was met with "Isn't she cute?" (I am, as Dave Barry would say, not making this up.)

Approaching 30, I want to be taken seriously. But I worry that I'll go from oddly twee directly into "old". Will I ever get to be seen as just an adult, not a kid or a senior citizen? Do I have to start dressing like the editor of French Vogue? I have to constantly hear that marriage, children, and house-buying are indicators of adulthood, which has made me defensive about being viewed as a child or teen. Now with America's economic problems, the media is always saying how younger people are "putting off adulthood" because we can't afford houses and families. People, adulthood is not something you afford. It's not a Louis Vuitton bag. It's something you earned because you survived this far, and that can't be taken from you, even if you're sitting broke in a roadside ditch. I am an adult, but it's like no one knows it unless they look at my birth certificate. There are myriad ways to be an adult, just like there are myriad gender identities.

A couple of days ago, I was skimming through The Drag King Book. I came across the story of a FTM drag king who started taking testosterone. He said that the hormones were the only way that he could be viewed as an adult man. Otherwise, he would perpetually be a boy. I could kind of relate. Because on the one hand, I resent it when people infantalize me based on looks, gender, sexuality, or lack of traditional life achievements. But on the other hand, I feel like I'm forever a girl, waiting to grow into some mysterious gender that I can intuitively understand. There's this idea that we grow into our genders, that from children, we become men or women. But I feel like, if anything, I'm growing out of the gender that I used to take for granted.

Browsing a clothing store on another recent day, I decided that rather than look "sexy and feminine", as the show What Not to Wear would favor, I wanted to look "weird and androgynous". Okay, maybe not weird. I actually want to look cool and stylish. But androgyny seems to have the same connotations with youth as asexuality. Before puberty, everyone is "asexual" and androgynous to an extent. Most people didn't remain as such after puberty, but a few of us did. To be seen as an adult, do we have to "pick a side"? Maybe, but as I work on this post, I'm beginning not to care anymore. It's aggravating when people's comments play into my own insecurities, but that doesn't mean there's anything wrong with me. I mean, this is what 27 looks like, whether that surprises people or not. 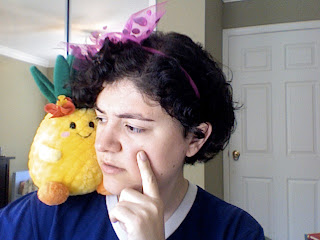 [Image: Photo of Ily, wearing a large pink bow and talking to a stuffed pineapple sitting on her shoulder.]

*A tangent on "looking like a student" (but still, gender related):

I told my mom that I'd look up the definition of "mansplaining" for her. On this post, I came across a comment by MissPrism that went like this:

"...you know, once or twice I have indeed heard a man say "I look young, so people assume I'm a student," but the VAST majority of the time it's a woman. Something's up with that: surely a similar proportion of men should look young for their age as women do? Thinking a young-looking woman must be a student isn't an excuse for mansplaining, it's part of it. Mansplainers assume a woman is as junior, and therefore clueless (the conflation of these two is of course hugely problematic in itself), as he can possibly construe her to be, while men are given the benefit of the doubt and assumed to be experienced and knowledgeable until proven otherwise."

While I don't think men are always necessarily given the benefit of the doubt (in other comments it's mentioned that men may mansplain to other men they perceive as "less manly"), it never occurred to me that people read as female might be told "you look like a student" more often than people read as male. It could also be possible that more women really do look young, due to social pressures to maintain a more youthful appearance. It's definitely an intriguing question. Maybe I'll ask my pineapple about it.

"I regard romantic comedies as a subgenre of sci-fi, in which the world operates according to different rules than my regular human world. For me, there is no difference between Ripley from “Alien” and any Katherine Heigl character. They are equally implausible. They’re all participating in a similar level of fakey razzle-dazzle, and I enjoy every second of it."
--Mindy Kaling, here.

I don't think I love them quite as much as she does, but I enjoy them sometimes and feel the same way in terms of them being sci-fi. When I was a kid, I loved reading fantasy novels. I'm not as into them anymore, but I've always had an strong fascination with world-building, which has stayed with me. I'm always intrigued by how more "reality-based" genres, such as romantic comedies, world-build in a fantasy-like way.
Posted by Ily at 1:59 PM No comments:

Email ThisBlogThis!Share to TwitterShare to FacebookShare to Pinterest
Labels: Quotes

In my last post, Jessica commented, "Acknowledging my needs/loves as real does not mean I can always fulfill them." So, this is the brainstorm I promised, which is targeted towards solutions for that dilemma, one that I share. I'm not saying "you should do these things" because I don't even know if they're good ideas. Maybe I should go through and delete the weird/bad ones, but I felt like just leaving the list as it tumbled from my brain.
In other news, the Carnival of Aces is still trucking! Check out the latest installment, on the theme of gender.
Posted by Ily at 5:40 PM 2 comments: