The whole book is well-written, but I really liked this passage in particular from "Rose of No-Man's Land", a novel by Michelle Tea. The narrator is Trisha, a 14-year-old girl living in a small town:

The television was on, always on, always turned to talk shows or news, something real, no chipper family sitcoms or emergency room dramas, only the real dramas of real living, everything going wrong all the time, everywhere. And yet I see very little on TV about how creepy men are in the streets or about the basic daily obstacle course a female is forced to run through. About how you can be walking along absolutely not thinking about your pussy your ass your tits, but then, wham, thanks to the drooly curbside dude, now you are. Now your mind is consumed with the idea, the reality of your pussy, ass, tits; the possibility of blow jobs, of getting fucked. I wish more attention would be paid to this phenomenon. That there would be long-term psychological studies on the mental effects of this, the changes in brain waves it produces in girl-brains. I can go days without leaving my room and never think of my boobs once. Then I leave the house and it's all anyone wants to talk about (155, emphasis is the author's).

Well I'll pay it some attention. Right now, I live in the 'burbs, where people pretty much leave you alone unless you get too close to their lawns or Suburban assaUlt Vehicles. But it was interesting that I was visiting a small town, probably one that's similar to the one Trisha lives in, while reading "Rose of No-Man's Land". While a friend and I were walking down the street, we heard some guys yell at us from their car. What they were saying was completely inarticulate; I couldn't make out any words. Even so, I was surprised how unsafe it made me feel. I think Trisha was right to wonder what these little incidents can add up to when they happen to you frequently.

Men can get harassed on the street, too. But it usually isn't just because they're men who deigned to leave their homes. And the big city is not immune from random harassment, either. There's an organization, Holla Back NYC, that encourages people to take pictures of street harassers. A lot of the stories on that site are really shocking, and would make comments about "tits" seem tame in comparison. The idea that anyone would find men shaking their penises at random women in public (as in one Holla Back story) to be "just part of city life" seems a comment on how far feminism still has to go. We're still living with the idea that a woman is public property-- that anything can be said to us, at any time, much like someone would make a casual comment on a piece of public sculpture. Our sexuality in particular is fair game, and that's one reason people can react with such hostility to female asexuals. (People can react negatively to male aces too, but for other reasons.) While I think the vast majority of men have gotten the memo that unwanted advances are not okay, there seem to be a problematic number of holdouts.

If you want more reading on the topic, "A Guy's Guide to Approaching Strange Women Without Being Maced" is a very awesome post for all genders to read. There are also various tips out there directed at men on "Ending a Street Harassment Incident".
Posted by Ily at 2:34 PM 6 comments:

The meetup went well, although I totally forgot to take pictures, as I'd planned to do. Seven people attended, from all over the Bay Area. We played board games and chatted about a wide variety of topics. One thing I've realized from the past few larger meetups is that while I'm excited that we're getting more people interested, personally I have a better time at smaller meetups. Blasphemy? Don't get me wrong, I think the larger meetups are rewarding, and I do try to get as many people to attend as possible. But the smaller ones are a lot more fun for me. I guess I'd just rather talk more in depth with people, and that's only possible with fewer of them. I wanted to figure out a way to break into smaller groups for part of the time, but didn't know how to do that without making people feel like we were at a conference or something. Any ideas?

Anyway, I'm not really sure what to do with this revelation, except to explore the idea that in order for the local asexual community to really flourish, we need to foster a wide variety of interactions. We all know I have a zeal for meetups, but they are limited by their structure. I don't really get bored of meetups, especially now that they're so infrequent, but I can imagine how someone might. Since there are always new people that often don't return, it can be a lot of similar conversations over and over, and a lot of the time, those relationships end when that meetup does. So if people feel like they've "been there, done that" with the usual meetups, there's no real next level at this point. For me, I'm glad that I've been able to hang out with some of the folks from meetups outside of meetups. That's one possibility. Others will have to be taken on by other people, if it's really going to be a growing community and not just me, or anyone else, telling everyone else where and when to show up.
Posted by Ily at 9:59 PM 9 comments:

Meetups, Let Me Show You Them!

It's been way too long since I've done a meetup-related thread. They're bimonthly now, rotating around the Bay Area for the time being, and we've actually planned them out for the rest of 2010, which is awesome. The next one is coming up this Saturday, 2pm, at Crossroads Cafe in San Francisco. It's a cool location and it looks like we'll have a good turnout.

After that is...the Pride Parade! Again! Apparently I've really been slacking off when it comes to hyping it up, so I'm going to have to increase my efforts a little. It's on Sunday, June 27, and we'll be congregating in the morning somewhere near the Embarcadero BART station. Like last year, I'll be contacting people closer to the 27th with exact locations and times (since I don't know them yet, either). Last year, we all wore purple and that looked good. We also carried signs and had flyers and a banner. If anyone has an idea for some other visual or educational element we could incorporate, do tell. I'm usually a good brainstormer but I'm drawing a blank on this one. If you want to participate (and haven't told me as much yet), comment here or send me an e-mail at sanfranciscoemily [at] gmail [dot] com. Or you can PM me on AVEN (username= ily). I don't know if this is obvious or not, but non-asexual allies are welcome-- we had a good number of them last time.

So far I only have 9 or so people confirmed, and I really want to recruit at least three times that many people...
Posted by Ily at 6:51 PM No comments: 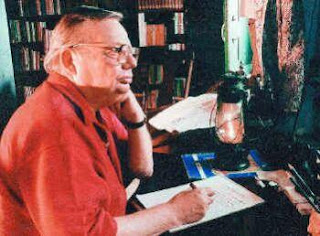 I talked about women who are single for the long haul, so here's a real-world male example. Last week, my friend A. was telling me about an author she really likes, Ruskin Bond. I'd never heard of him, but he's well-known in India, where he and A. are both from. She told me a little about his life, and it seems like he was able to come up with a solution to the "dying alone" thing that's working for him. The fruits of an internet search imply that Bond has been a life-long bachelor, and that his first love was India itself. His admiration for the country, its people, and its natural beauty seem to comprise a large portion of his works. As A. tells it, Bond was living alone when he took in an orphaned boy. Now in his 70's, Bond lives with his adopted son, his son's wife, and their children (I just hope they have a big house). He says in this interview:

I feel humbled by their love. I may have adopted Prem, but they all have adopted me. They have looked after me so well, for so long. They made it possible for me to write. They took care of the worries of keeping a home, all I did was write. My grandchildren are my joy.

I thought it was interesting how the interviewer said "You are a great grandfather now, without having to marry!" as if Bond had found this awesome loophole. And maybe he did. All I know is that when it comes to relationships, we need more "loopholes". If being surrounded by a big family is what you dream of, it turns out that there's more than one way to get there.

This book seems to explain some of Bond's views on sexuality, at least as they appear in his writings:

Hence anyone who approaches Bond with the hope of enjoying boy-meets-girl romance would surely be sorely disappointed. What Bond tries to portray in his various short stories and novels, is neither physical attraction nor platonic relationship, it is the Indian mysticism of love that permeates the entire creation. (pg. 68, "Ruskin Bond of India" by Norah Nivedita Shaw)

Whoa...*bobs head around as if wearing 3-d glasses*

"Androgynous traits are those that either have no gender value, or have some aspects generally attributed to the opposite gender."
--Wikipedia
I really missed "Things Asexuals Like"! I hope this one isn't too much of a stretch. But it seems like quite a few asexuals are androgynous. Some of us actively appreciate androgyny, and I would guess an even larger number of us don't mind it. (That shouldn't be too unusual, but it seems like androgynous people-- is that a boy or a girl?!?!?!-- are an object of consternation to some.)

Personally, I would say I'm definitely androgynous mentally. My way of thinking is both masculine and feminine. But I haven't really looked androgynous since childhood, during which I was once referred to as my mom's son. Since then, I became more interested in clothes and style, and developed an undying love of the color pink. However, since I tend to avoid looking sexy, it seems that I also avoid the top levels of looking feminine as well.

When I think about it, I don't see a lot of "highly-gendered" people at ace meetups. It seems like women have more gender markers-- dresses and heels, complicated hairstyles, and makeup. And most of these things tend to be absent from asexual women I've met. Many of us seem to have short or simple hairstyles, wear little or no makeup, and dress in jeans, sneakers and such. Maybe part of this is just the fact that the Bay Area is extremely casual. But maybe, like me, these people don't really care whether or not their appearance sends out feminine signals. I remember being in a college class, and a girl had come in with a really short haircut. "Don't worry!" said a classmate, "It still looks very feminine". I have a feeling that many asexuals would be unlikely to seek that sort of reassurance.
Posted by Ily at 2:48 PM 8 comments: