"Pictures from your post-[alma mater] life are ok too! This would be a great way for your former classmates to see what you have been up to: weddings, babies, cool trips, etc."

--E-mail from the college I went to, soliciting photos for the 5-year reunion
Sociologists keep telling us that Americans have fewer social connections than ever before. But we still seem to love reunions: For school, for work, for camp, for family, for our ill-fated sojourn on the space shuttle. Of course, high school and college reunions are the throbbing heart of all of them. For me, my 5-year college reunion is in the fall. And I can't say that I want to go, due in part to my crippling propensity to compare myself to other people. But my early-20's discovery of asexuality makes reunions thornier still. If the last time I saw someone was over five years ago, then they probably don't know I'm asexual. In the past five years, I have not gotten married, had a good job, had a child, or traveled extensively. In my mind, many of the important things that I've done relate to asexuality...which I have vowed not to bring up for the first time in a group of people. (I've tried it in the past, but there always seems to be one ignorant person in the group who is super-loud about their disapproval, making it unusually difficult for anyone else in the group to accept what I'm saying.)

Email ThisBlogThis!Share to TwitterShare to FacebookShare to Pinterest
Labels: Coming Out, queer issues

My first post on the Hobbit Acceptance project has been featured here as a guest post on Cynosure. It's part of a series called HAIRevolution, which is still accepting submissions. Check Cynosure out; there are a lot of posts dealing with varying aspects of self-love and acceptance, which is something I've been thinking a lot about lately. (And if you came here from over there, welcome! Unfamiliar with the exciting world of asexuality? Check this out.)
Posted by Ily at 10:38 AM 6 comments:

Email ThisBlogThis!Share to TwitterShare to FacebookShare to Pinterest
Labels: HAP

"Camp Victory, How Wonderful You Are"

You can consider this "Only the Good Die Young" Part II.

I didn't think I'd like Huge. It's about kids at fat camp, after all, and aired on ABC Family, which is not known for its realistic and nuanced depictions of teen life. But a glowing review by Lauren finally persuaded me to watch the show, a year after it originally aired.

People, this show is so good, it will just break your heart that it was killed after only ten episodes. It isn't perfect, but it's better than 99.9% of the teen dramas that have been brought back for multiple seasons. Although discussions of weight tend to quickly devolve into harsh and judgmental territory, this show actually manages to portray fat people without moralizing. Being fat may have brought these kids together, but their fat does not define them. There was a strange episode about an "authentic Native American spirit quest", where I couldn't tell if cultural appropriation was being satirized or just occurring thoughtlessly. It was a puzzling inclusion for a show that seemed to be trying its best to be sensitive about a wide range of topics.

For me, I know a show is good when my favorite character is ever-shifting. I was going, "Oh, Wil is totally my favorite...no, Becca...no, Trent...no, Alastair...". It means the characters are multi-dimensional and have emotional depth. Characters of all genders (and I can actually say that and have it make sense here, because Alastair may be genderqueer in some way) have inner lives that go beyond checking out hot people or trying to get laid.

And yes, there is an asexual, aromantic minor character, a camp counselor named Poppy. She's not a sociopath or a misanthrope! There is, however, one word that does describe her: 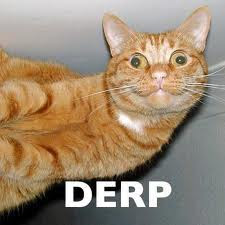 She's incredibly dorky, perhaps verging on derpy. But she means well, is very warm and friendly, and obviously cares a lot about her campers. And she plays ukulele!

Meetup on Sunday, July 17th! I actually can't go...WHAT?! But you should go. If you're not in the area, why haven't you perfected your teleportation yet?

Email ThisBlogThis!Share to TwitterShare to FacebookShare to Pinterest
Labels: randomness

Not Having a "Career"... Makes Me Want to Smoke Crack.

If you thought my stomach hair-related angst was overly personal...you ain't seen nothing yet. A continuation of this post. Which is, frighteningly, from July 2008.

You know those problems that just won't die? Maybe they're a life strategy or mental framework that just isn't helping you anymore. You've identified the issue long ago. It makes you feel bad, and you want to change. But you don't know how to change. And in a world that enables your pain, you don't know any other way to feel.

Well, I still have the same issue that I did in 2008. I feel like there's a hole in my life where a career should be. I keep telling myself, "I can be happy with or without a career", but after my career as "a student" ended, I was never quite the same person again. Sure, I had some jobs, but they didn't give me that sense of purpose that I craved. After college graduation, my mental health and functioning were completely shot to hell in a matter of weeks. Only years later did I read about the extreme emotional turmoil that can afflict autistic spectrum folks who are unprepared for these transitions (although I'm sure there are neurotypicals who've been through the same thing). I felt like after college, I died. That the "real me"--the optimistic, motivated person I used to be-- was frozen in a vault somewhere, waiting for a time when society could make some better use of people like myself.

It weirds me out that there is an amalgam to my experience--the person who feels empty without a mate--and yet the advice geared at these people barely goes a millimeter into what could be a very deep wound. They're told, "don't give up hope, you'll find someone", which leaves them even more bereft if they never do. In American culture, we're supposed to beat ourselves up for "falling behind". As adults, we're supposed to be the dictatorial parent, spanking our own damn selves for failing to "measure up". It's normal to look at Facebook (oh, the humanity) and see all the people getting married, having kids, buying houses, attaining prestigious careers...and to think that without these things, we are inferior, even if beyond the goalposts are things that some of us never wanted in the first place.

Although I am a radical, and have little good to say about most aspects of our mainstream American culture, it has just as much a hold on me as anyone else. Maybe the pressures even affect me all the more, because damaging cultural tropes were able to jump in and fill the hole that "student" left in my identity. The hole was quickly filled with a lot of self-hatred that it has, and will, take me years to overcome.

Self-love (and no, I don't mean it that way) is relatively easy when everything is going well and according to plan. But it's most needed when it's the hardest to conjure up: When the obstacles seem endless and the rewards few. When "he", whatever he is, is nowhere in sight, and might never be showing up at all. The answer is not to bemoan the fact that people have become doctors and lawyers in the same time that I've been doing "nothing", i.e, a bunch of sometimes-important things that our culture couldn't care less about. The answer must surely be to fill that emptiness with love (hi, ms. hooks)--the self-generated kind, since the space is too large for anyone else to fill for me.

It might be telling that I've written much more about romantic love--something I have never experienced--than self-love, which is something I desperately needed to cultivate, like yesterday, in order to have any chance at a happy life. As a culture, we know what romantic love looks like, and I would venture to say that we don't know what self-love looks like. If I can find that out, it may not be a husband, a career, or a house, but it would be something of great value. Whether people care about it on Facebook, or not.

Now, let's be soothed by the dulcet tones of Scandinavian indiepop.
Posted by Ily at 6:02 PM 16 comments:

Email ThisBlogThis!Share to TwitterShare to FacebookShare to Pinterest
Labels: work

I had no idea what kind of response I would get on the first HAP post, but it was fantastic. I so appreciated your support, encouragement, and commiseration. Much love.

Things I've learned since I have started, strangely enough, to think about body hair:

At any rate, the HAP continues apace. I continue to wear my rolled-up jeans, shorts, and even wore a skirt one day. I did wear a sleeveless shirt on two occasions, but no one really saw me on those days. No evidence yet than anyone has particularly noticed or cared about any of these things, although I still feel apprehensive that I'm going to get rude comments. Maybe I should try to change my thinking and make it my goal to get rude comments. Then if I get them, I could feel vindicated rather than diminished. I have always shied away from making people uncomfortable, but sometimes it's impossible to make a statement, whether social or artistic, without doing that. Although if no one ever says anything...that would be perfectly fine!
Posted by Ily at 2:03 PM 14 comments: