A-s through the ages, Episode 1

The man who is probably the most well-known asexual in history-- a real pop culture and literary icon in every possible sense-- never really existed.
Go figure.

Apparently though, he was so beloved by his fans that when he died, they were so upset that his author had to bring him back. Of course, I'm talking about none other than Sherlock Holmes, 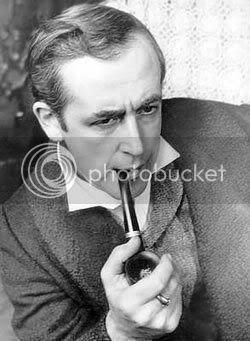 portrayed here by actor Vasily Livanov. The font of knowledge that is Wikipedia (and yes, I do believe everything I read on Wikipedia, despite warnings that I shouldn't) claims that The Guinness Book of World Records has listed Sherlock Holmes as the world's most portrayed character, with over 70 actors playing him in over 200 films. There have been speculations that Holmes and his best buddy Watson might have been homosexual, however, homosexuals already have enough famous people. So I am claiming Sherlock for the A-Team, okay? Not to mention that Watson apparently did show an interest in women, and even married, while Holmes' interest was always perfunctory at most...if it appeared at all.
We could also please all the people all the time and say Holmes was a gay asexual. I could live with that.
Wikipedia also says of Holmes,
"Holmes does have capacities for human emotion and friendship". And really now, thank goodness for that. So we're human after all. Hah.
The moral of our story today: A-teamers, get famous! We'll need some real people for the next age.

You are absolutely right to claim Sherlock for the A-team! Actually I was always a big fan and have read all the stories...no way he and Watson were gay. Watson is clearly straight and does marry a young woman he meets on one of his cases with Holmes. On another case (A Scandal in Bohemia), Holmes encounters an actress named Irene Adler. As Watson describes her : "to Sherlock Holmes she will always be THE woman", if I remember right. Anyway, there is nothing sexual in the relationship, not even any evidence of physical attraction. He does admire and respect her, though, because she is one of the very few people ever to outwit him.

One interesting thing about Sherlock Holmes being A, though, is that you begin to notice how uncomfortable that seems to make people. It's as if they don't know what to do with the fact- this is shown by how many movies and stories there have been about Holmes since the original, but they have him getting involved in some kind of romantic relationship. It's easier to notice with Holmes because he is such an incredibly popular character that others want to continue his story. One of the best-known examples is a series of mysteries by Laurie King- I think the first was "The Beekeeper's Apprentice" - in which a somewhat older, now retired, Holmes fall in love with and marries a young woman named Mary Russell.

If Holmes had been gay, maybe later authors would not have tried to change his sexual orientation- however when they encounter asexuality there is this impulse to make something up. I wonder if current-day members of the A-team also find themselves dealing with well meaning friends and relatives who just refuse to accept that they could be asexual. If so, that must make it that much harder for them to come out...

Remember, though, A-teamers, Holmes became one of the world's most famous characters- real or fictional. In fact, he still gets mail delivered to his address at 221 B Baker St. And he accomplished all this without ever having a girlfriend (or boyfriend either)...Something to think about.

Wow, thank you for all the detail! And you're right that asexuality does make people uncomfortable-- especially when we've just supposedly figured out that "all humans are sexual creatures" etc. I try to understand why not having sex is so freaky to people, but there is a chance I never will...
And it's sad that later adaptations put Holmes into romantic situations. Not that romantic situations are sad, but we've missed out on chances to show that the way Holmes was originally portrayed is an okay way to be. Guess we'll just have to go back to the source texts on this one.

Sherlock for the A-team! I've always loved him and I've read most of the stories.

I completely understand feeling awkward and out of place when I tell people that I'm an Ace. I had to tell someone that yesterday and he came back today and said that it wasn't possible because everyone thinks of sex or else no one would reproduce... well if we got him on this planet, there ought to be at least one more kid in the world in the next few years or so, right?

I've always thought that was a ridiculous argument, since asexuals are only 1% of the population. It's not like we're going to single-handedly cause human extinction. Besides, some asexuals want to have kids.