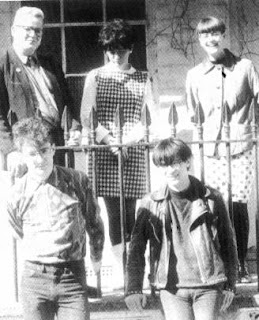 [Above: Talulah Gosh, 1987]
So, while trying to find some conclusive evidence pertaining to the sexuality of (Orange Juice frontman) Edwyn Collins (sure, he's been called asexual in reviews, but those are rumors! I need more!) I found this:

What is never considered by such rockists is the inherently political nature of C86. The deliberate return to the state of innocence by C86 bands was a revolt against the traditional rock mentality. Calling your band BMX Bandits or releasing a single called My Best Friend was to stick two fingers up at rock orthodoxy. The asexual appearance of, for example, Talulah Gosh’s two female members was to negate the received opinion of women in pop as sex objects far more powerfully than Helen Reddy singing I Am Woman or Gloria Gaynor singing I Will Survive. C86 produced women who not only didn’t believe in rock’s gender hierarchy, they didn’t need it.

(FYI: C86 is just another term for what's now known as "twee" or "indiepop" music. It got its name from a compilation cassette given away by the British music mag NME. Orange Juice wasn't on the C86 tape, but it operated in the same genre as the bands that were. Wikipedia also explains. And it also says that Collins has a wife and kid...but that doesn't really prove anything. Further, some C86-influenced bands you've probably heard of--Fire Escape cites Belle & Sebastian, the Cardigans and the Shins-- have even gone mainstream in recent years.)

I just realized that in the chronology of my life, my discovery of indiepop paired up almost perfectly with my realization that I was ace. Coincidence?

Sure, C86 music was never on MTV, but we do have something that could be called a history in pop culture. You just have to look for it, and, okay...infer a little.
Posted by Ily at 7:04 PM

I think all history requires a great deal of inference. For example, tons of people wonder whether various historical figures may have been gay. In a time when "homosexual" was not really a word in people's vocabulary, and it was certainly far from respectable, it makes all the sense in the world that people who were gay, wouldn't let that be known.

It seems likely that there is a similar thing going on with asexuality. If there is no acceptance and understanding that what you are is a normal, natural and healthy thing to be, a lot of people will fake it.

Unless you can find a diary from some historical person in which they go on at great length to describe how much they love sex and just can't get enough of it, I think it is fair to wonder if some of the great historical figures we know and love may have been asexual.

Take Queen Elizabeth I. She never married and as far as anyone can be sure of, she never had a lover either. While there were plenty of political reasons for her not to marry or have children, it is also possible that she was completely disinterested in sex, and this disinterest made being a virgin for life hardly a sacrifice.

Totally...too bad no one will have the same amount of speculative fun with us modern folk ;-)

Edit: Unless you're Morrissey. Or Clay Aiken. Or Alan Rickman. Or...oh, nevermind.

Who is Clay Aiken?

That's the problem though- being heterosexual is the default for every public figure unless it's proven otherwise- and that proof usually comes with a scandal or drama of some sort.
Why can't we flip it around and say asexual until proven otherwise?

It actually makes some sense to use asexuality as a default, since it's more "neutral" than heterosexuality. But I guess in an ideal world, people wouldn't make these assumptions at all.