Spotlight On the "Forbidden" Topic

Assumption #3? Pause while I laugh for a few minutes...sorry people, but there have been many, many others standing where you stand. Just assume I've heard everything already and maybe we can move forward with a little more dignity.

And because it's just too much fun to tackle "forbidden" topics, I'm coming back next time with the pop culture angle...stay tuned. Until then, here's a picture I thought was pretty amusing: 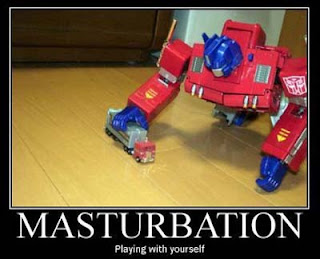 Email ThisBlogThis!Share to TwitterShare to FacebookShare to Pinterest
Labels: Theorizing

May I ask how you're defining sex/sexual? I totally agree that whether asexual folks masturbate is both nobody else's business and not necessarily relevant to asexual identity, but I'm having trouble imagining any definition of sex that is consistent with this post. I usually define sex as something like, "physical stimulation in the general direction of orgasm for one or more people." I can't think of any other definition that isn't either circular/self-referential (i.e., "stimulation etc. that the participats deem sexual") or that doesn't exclude things that are definitely sex acts (if someone's mind wanders to beautiful landscapes with being pleasured by a lover, is the act rendered not sex?).

You may! :-) Looking up "sex" and "sexual" in the dictionary, all the definitions were, as you said, circular and self-referential. For example, one definition of "sex" was "sexual intercourse". Uh...no duh? I don't have a written-in-stone definition for sex (was that totally obvious from my post?), but I tend to think it would involve more than one person.

Be on the look out babez!

Correct me if I'm wrong, but can we not just point out that asexuality at least in part refers to a lack of sexual attraction to other people and leave it at that?


Ily, I love how you went straight to your dictionary. It's very interesting that all the definitions of sex are self-referential. I don't think I've seen many non-self-referential definitions at all, except for the coital definition, which I've always suspected was created mostly for virgins-till-marriage and Bill Clinton.

Without going into endlessly circular arguements, it might be easiest to define sex as something which would cause a person to lose his or her virginity.
Whether or not that would include oral sex might be open to discussion, but the fact that it has to involve more than one person should be obvious to everybody.

I'm not sure non-self-referential definitions of sex are actually that useful, though.

Interesting discussion we've got going...as for "leaving it at that", I totally hear you Meah, but sometimes when you leave something, other people pick it up and take it to places you never would have intended. I know there are too many assumptions made about asexuality to target all of them, but I figure we can at least do what we're able to.

I think this is yet another place where asexuals can be useful to sexuality as a whole-- "sex" really has no standard definition, and yet everyone just says "sex" as if we're all on the same page. I think outsiders' views would be helpful here. I agree, SM, those acts are different, not because what goes on physically is different, but because they would probably have different meanings and intentions to the person. I tend to be of the "we create our own reality" school of thought, which probably shows in this post. :-P

Feel free, Dovie...people can be really difficult sometimes. Sometimes it's like, "Well, I'm trying to tell you something important about myself here, but you're just getting hung up on semantics..."

Here via Feminists with FSD, and I love this post. I'm not asexual myself, but being queer, kinky, and sexually dysfunctional, I'm used to defining sex differently.

And if you blur the lines by saying that so-called non-Real Sex™ things "count as" sex (i. e., frottage or bondage)

—why shouldn't you then affirm that so-called sexual activities...aren't?

Here's a real-world example: when I was a very young child, I masturbated. I didn't have a sexual orientation. I wasn't fantasizing about sex at all (that kind of thing would have frightened me); I did imagine stories, though (which are none of anyone's business). I could only conceive of it as a sort of hunger and satiety thing. It was hella fun. Of course, I thought Duck Tales, birthday cake, and dinosaurs were also hella fun.

Later, I developed a sex drive and attractions and what not—but it could have turned out differently. I think that we in society assign meanings to things, and come to think the meanings are innate when they're really not.

Thank you for shedding light on a very loaded topic!

Thanks, Anon! I agree with you on the assumptions that meanings are innate. Tends to be especially true when it comes to gender...

Example: Rape. Rape is an act of violence and not an act of sex. An outside observer from a variety of vantage points might have difficulty distinguishing between rape and sex. They remain nevertheless drastically different things.

True, Omes. I'd like to think that you wouldn't get any disagreement on that point.

Just another thought on this subject that came to me now.

The reason I imagine people ask this question is because they don't know what "asexual" means. Does it mean not being attracted to other people, or not having any urge for genital stimulation whatsoever?

I agree. A lot of people seem to make (wrongful) assumptions about the definition. And even if they do know it, again, a lot of people have never really thought before about its terms.

it seems like there's just way too many labels to me...as my overall opinion about asexuals, or any other label, lesbian, gay, straight, bisexual. there are lesbians who have sex with men. it just seems like identity politics.