Maurice: Your Fangirl is Here

Maurice is a 1987 film about two young men, Maurice and Clive (played by James Wilby and Hugh Grant, respectively), who fall in love with each other at Cambridge in 1909. The directions their lives take after this is charted in typically sweeping Merchant-Ivory fashion.

I always find myself relating strongly to tales of forbidden gay love. Asexuality may have never been a jailing (or hell, hanging!) offense, but the flak some of us get from friends, family, lovers and even strangers can make solitary confinement seem welcome on bad days. Just look at this dialogue from the movie, in which Maurice sees a doctor, desperately seeking a cure for his homosexuality (occurs around 1:15):

Doctor: What put all this into your head?
Maurice: You've never guessed? I'm like Lord Risley [old school chum; convicted homosexual]. I'm an unspeakable, of the Oscar Wilde sort.
Dr: Rubbish. Rubbish.
M: Dr. Barry, I can't have explained...
Dr: Now listen to me, Maurice. Never let that evil hallucination, that temptation from the devil, occur to you again. Now, who put that lie into your head? You, whom I see and know to be a decent fellow.
M: Dr. Barry, I want--
Dr: No sir, I'll not discuss! The worst thing I could do for you is to discuss!
M: It's not rubbish to me.
Dr: Rubbish!
M: I've been like this ever since I can remember, without knowing why. Am I diseased? If I am, I want to be cured.
Dr: Find yourself a pretty young woman. She'll soon cure you. It's unspeakable.

With some slight tweaks, this could, sadly, be an asexual experience. It sounds so melodramatic, but it's really happened to some of us. True, there are some deeply sad things about Maurice, but it doesn't quite make it onto my "Most Depressing Movies of All Time" list, in which fellow M&I flick The Remains of the Day earns my #3 spot. I think part of what made me sad was the fact that if I, too, had a huge country estate where I could just ride horses and "preside" all day, I could handle a little forbidden love. Sigh. And come to mention it, that is what Maurice will make you do. Sigh. A lot.

Interestingly, I've never found Hugh Grant to be very attractive. He's seemed a little...jowly lately. But 21 years ago? He was freakin' adorable! I couldn't find a picture that adequately captured him, but here he is brooding a little, which I always find appealing: 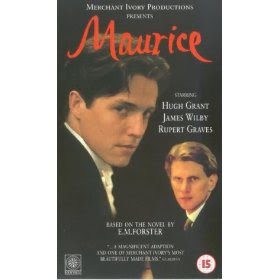 I think I just have a crush on this whole movie. M&I excels at creating atmospheres, and in Maurice, they've created an atmosphere that is my particular fantasy: Discussing arcane topics in old stone buildings with exceedingly erudite and witty men wearing tweed. (I totally love Lord Risley too, in one of the first scenes. He kind of reminds me of a gay, sober Withnail.) Sigh, sigh, SIGH!
Posted by Ily at 6:42 PM

Right, so... I officially have to see this movie now. My disdain for Hugh Grant aside. (Really? He was adorable twenty years ago? I can't wait to see HG adorable.) :)

I think it's particularly tragic that we live in a society where so many people would read that scene, as written, and shake their heads in disbelief; yet, if they read it with the "slight tweaks" you mention would make it applicable to asexuality, they'd no longer see the problem. It's like we learn but only to the extent where we have to apply what we've learned, and then we forget all over again... and another whole population suffers because of it. Lame. ( <-- Understatement.)

Tweed should definitely go on the list for a future installment of "Things Asexuals Like." There are several AVEN threads about this phenomenon floating around, if memory serves me.

Do you really keep a "Most Depressing Movies of All Time" list?

I vaguely remember some tweed conversation on AVEN...I'm going to have to look for that.