According to an unscientific poll, 53% of the AVEN population doesn't drink alcohol. Even though there are many underage folks on AVEN, I still found this surprising. Much like Scrabble, I am yet again an exception to things that asexuals like. Although I do drink, I was often the token sober person on many a college party-going excursion. We all know that alcohol lowers your inhibitions, and maybe aces are wise to the fact that most of us have inhibitions for a reason. It's odd that a malty beverage could be so closely related to sex, but it is. I remember someone telling me once, with some awe, that they had "sober sex" last night, with the implication being that they mostly had drunk sex. And I don't think that's too uncommon. In "He's Just Not That Into You", there's a whole chapter about men who will only have sex with you when drunk (if you were wondering, they're actually not that into you). However, drinking 'til she's cute is usually a lost cause for asexuals. I'm probably not alone among asexuals when I admit that my stomach gives out before those pesky "inhibitions" do. Unlike some sexual people, my "drunk enough to make out with you" threshold is probably a few sips away from alcohol poisining. 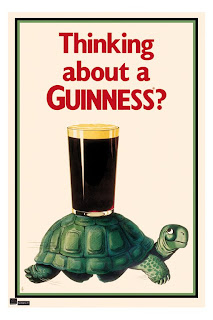 [Above: Most aces probably aren't, although I personally can't think of anything better than a Guinness AND a tortoise...]

Why do I bother drinking at all? Probably because it's the one thing I can do. I'm not going to get my kicks from having sex with random, inappropriate people. Drugs are for people with better networking skills, cigarettes are too expensive, I'm scared of heights, and I'm not aware of the existance of a fight club. So an innocent beer it is! Now, don't get the impression that aces are somehow not as fun as other people just because we're unlikely to lead a rousing chorus of "Don't Stop Believing" at your local bar. We may not be big drinkers, but we can still freebase cocaine with the best of them.
Posted by Ily at 7:44 PM

Oh, I so pick the tortoise. Heh.
I actually have a soft goal to not be a teetotaler at some point (perhaps I'm "staying open" to the possibility of alcohol, the way I'm trying to be open to the possibility of sex? nah, it's probably more random than that)... but this is hilarious nonetheless, and true for me at least. I know that my desire to be in control, partly to avoid unwanted sexual situations, is a motivation for not drinking. so, I definitely think a correlation is possible. but mostly I just had to say "kudos" on the awesome turtle pic.

Haha, yay! I definitely want to have a tortoise when I get a larger living space someday. They're so cool!

I'll pick the tortoise too - I've been a turtle/tortoise fan for years. A friend once gave me a magnetic fridge ornament with that design, saying that now I had a reason to try beer :-D

I guess I'm one of the 53%. My parents drink wine so I tried some when I was younger, but I haven't had a drop of alcohol in years and I don't intend to ever have one again. I liked the taste of some wines but my mother once commented that I was more lively or something after drinking a glass of wine, and I hated that my behavior could change without me being aware of it. I guess it's all about being in control, like Willendork said. And I like apple juice better anyway.

Ah, you beat me to it! I was actually just thinking about writing a post on drinking. I used to be a teetotaler as well, but lately I've gradually started getting used to it... When I'm alone, anyway. We'll see if I'll ever get comfortable drinking around other people.

Ever read Esio Trot, Illy? And for the record, I'll lead a rousing chorus of "Don't Stop Believing" drunk OR sober.

Here's one more ace who definitely IS thinking about a Guinness (and loves those posters - there was an awesome one with a lobster at a bar I used to go to as an undergrad). I'm usually done after one or two drinks, though, so maybe there's something to this after all.

Heh, it's another way I don't fit the stereotype.
I fit the *other* stereotype when it comes to drinking; the student one... :/
That said, I was a late starter on it, and I tend to be the half-way responsible drunk. And I don't get off with random people, merely start in depth conversations (usually about sexuality) with them...

p.s. I am perhaps more likely to lead a rousing chorus of "Don't Stop Believing" than you might think. I have an impressive ability to make a fool out of myself even when I'm stone-sober, ha ha.

Well, it might be against my better judgment, but I guess I'll have to put some Journey in the jukebox at the A-bar...thanks for all the comments, folks!

I just want you to know that you are incredibly smart and insightful...every time I read you're blog I'm left thinking, "Oh my god, you are totally right! I never thought of it that way but it makes so much sense!" It's like a movie where at the end all the threads come together in an awesome way that just makes you go "wow" and almost like sends a shiver down your spine cause its that awesome :-P
Like this entry was really good and I never really thought about aces and alcohol :-P
Pretty much I think you are amazing and a phenomenal writer and I just want to make sure that people tell you often :-)

I love you and I'm proud to be your sister

Ah, ma petit Madeleine, it's mutual appreciation time here again...thank you so very much...I may not be able to get a job, but I am still lucky because I have a sister that loves me as I am. That really means the world to me. I love you lots!

-we can still freebase cocaine with the best of them-
you are so damn funny. I'm so happy to see fun and light hearted blog posts. I'm not a teetotaler. No sex and no drinking?! jesus how else am I supposed to socialize, plus I don't want to get completely misread as a Religious Right type person rather than the fabulous queer that I am. It was quite the acquired taste for me, I worked hard to become a drinker :) I like it now. But I too would pick the tortoise over the Guinness.