World Pride: Contaminating You With Asexiness

I feel like I should talk about World Pride (which took place in London last weekend), but it seems like words are failing me.  It was just awesome, simple as that.  The feel was pretty different from San Francisco Pride, although not necessarily in a good or bad way.  Due to budget issues, all floats had been cancelled, and so every group was on foot.  The asexuals n' friends got jumbled up with roller derby people on skates, as well as a transgender support group.  Someone behind me was yelling, "Trannies forever! Trannies for life!" for the entire parade (you go girl!).  But I like that smaller groups didn't get drowned out so easily by the huge floats (although we might have almost drowned in the sporadic bursts of rain).  It also seemed like fewer people came as spectators.  I was handing out flyers for the majority of the march, and got the feeling that most of the people were of the "Oh, I was shopping at H&M and just decided to come and look at this pride parade" type.  However this made the crowd remarkably more sober, and I saw many more people (compared to SF) actually reading and considering our literature.  Some people's faces had looks of confusion and even disgust.  I heard a few comments to "keep away from the asexuals!" as if our orientation was contagious (oh come on, it's pride, we're all recruiting!).  But as usual, others seemed genuinely interested and curious. 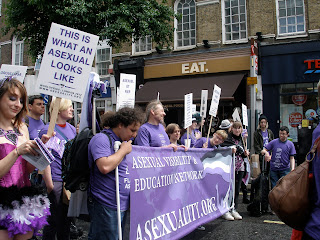 [Image: Aces gearing up to march in the parade.  You can see our lovely banner and placards.]


So, y'all, I just met a whole bunch of really nice, welcoming, and just plain awesome and asexy people.  It never fails to amaze me how with so many aces, I feel like I can tell them some hella personal shit (as we might say back here in NorCal), even if I don't know them very well at all.  I found myself sitting around a table with a couple of aces, telling them something I had never said to anyone before in my life, and feeling totally comfortable.  There was a moment when a bunch of us were attempting to "go out" on a Saturday night, and we ended up in front of a crowded club with loud music.  We were all tired after a long day, and started making numerous excuses about how we were hungry, sore, wanting to sit, etc.  It struck me as really funny because it was stereotypically asexual, but in that moment, I just felt so much affection for those people.  Because it's not a group where folks are trying to "be cool" or pressuring others to do so.  I've felt that with asexuals here in the US, and across the world, it didn't change.

(Also, I've wondered why asexuals in the UK seem more interested and/or successful in "hooking up" romantically with each other than many in the US.  Well, they do have their meetups in a place that sells pints for 2 pounds.  And those bad boys are potent, let me tell you.  Now, maybe alcohol is not the only reason, and maybe my perceptions are off.  But I don't think I've ever been hugged by more people in a single night than I was in that pub!)

Maybe words didn't fail me after all.  There's more to tell, but for now, this will have to do.

Email ThisBlogThis!Share to TwitterShare to FacebookShare to Pinterest
Labels: Community

I read your post out loud to B. We're so glad to hear you had such a wonderful time in London!

Just watched one of the many videos on youtube of the parade, had to fast forward though 22 minutes worth of people walking to find our purple parade! (bet I ate up quite a few of my my internet downloads in the process haha!)

I couldn't see you in the video i watched but saw David Jay and some other faces I recognized from the ace world! looks and sounds like it was a FUN day!!

So proud to be an Asexual! And so glad our flags colour is purple!!! my favorite colour and it looks soo good when you guys are wearing it in the parade too!

I know I have been quiet lately but still here hanging out in the shadows!

@Katie: Thanks! I feel somewhat relieved that my first traveling-alone experience went well :)

@TheJester: I'll admit to being one of the people who was skeptical of the flag at first, but it's just so...damn...wearable!

Gooey is a good word for it ;)

Incidentally, it seems like the Canadians started the hugging thing - I got glomped on Friday, and the tall guy from the Netherlands with the monster amounts of eye makeup suffered quite a bit more. He's just extraordinarily huggable, although he doesn't really like it, poor thing. Me, I got used to it over the space of three days - like you, the company of asexual people makes me so much more honest and open to stuff that I usually don't do or talk about.

Otherwise, I agree. It was awesome.

Hey Carmilla, it was good to meet you IRL! What I find funny about hugging is that is seems to be contagious...like, "okay, if I'm hugging one person, I might as well go ahead and hug everyone." And then other people are like, "well, while we're doing hugs, guess I might as well do the same..."

You're on to something there. The cuddle-addicts really got us started, and well. I went along mainly because I could be sure nobody would try and cop a feel.

...So, hugs do indeed contaminate. Full circle to title.