Traveling Alone: Tips for the anxious and socially awkward

Here it is at last!  My epic post about traveling alone, with tips from my experience.  These tips are directed towards people similar to myself, admittedly--folks who've had no experience traveling alone, who worry they might be lonely, bored, or anxious, and for whom meeting new people isn't really their "thing".  There are a million blog posts about traveling solo.  A lot of them include good safety tips that are relevant for everyone, so I'm not going to delve deeply into safety here.  And while there are traveling-alone tips out there for introverts, what I found wasn't very useful for me.  Yes, I'm introverted, but I'm not neurotypical.  There certainly aren't many travel tips written by us, so that's why I wanted to add my voice to the topic.  You know I love a numbered list, so let's get into it! 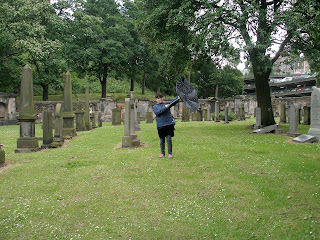 Bonus item: Stuff to do at night, solo!  For shy and fatigued people.  My main concern about traveling alone was always "what to do at night".  I don't like going to bars or clubs (the "nightlife" standbys) alone.  So, here are some ideas for stuff to do by night:
I hate to end on "chores", but to paraphrase Belle and Sebastian, a list needs to end somewhere.  While I was quite worried about traveling alone, I'm glad I tried it.  If I don't travel far afield in the future, it will probably be for environmental reasons rather than lack of companionship.  That's definitely progress for me.  Also, it was probably a good idea that I made my maiden voyage to an English-speaking country where I'd already briefly lived.  Three weeks in Mongolia would have been much harder.  Maybe next time...

I'll be traveling solo in Europe soon and I found this post really relevant! Especially the bit about nighttime activities. I'll see if I can learn from your advice and avoid some of the nighttime anxiety I usually feel when I'm halfway around the world.

@Janet: Glad to hear it! Hope you have an excellent trip :) I found that my anxiety at night would definitely decrease the longer I stayed in one place, but when I changed hotels it would start up again. Sometimes just knowing those patterns can help diffuse them.

Hi, these are great tips:)

When I've travelled alone nights are definitely the thing I've worried about most. Probably because every crime-show I've ever seen competes with my mum's constant warnings about rapists, murderers, etc, lurking behind every bush and rings louder in my ears when I'm in an unfamiliar place and feeling a bit vulnerable.
After a few days in the same place I tend to relax but I have the same problem as you, in that
clubs and bars are really not my cup of tea so I've struggled with finding stuff to do at night even then. But next time I travel to a big city alone I will totally try some of these suggestions.

Also, another potential way to meet people to do stuff with while travelling is to stay in hostels rather than hotels sometimes. I'm more than a little bit awkward, but I found it relatively easy to strike up a conversation with strangers over breakfast or whatever when I knew I had at least one thing in common with them – ie, we're both travellers/tourists – and from there you can sometimes make friends who you can hang out with for dinner or go on outings together.

Anyway, sorry for rambling. I love your blog and have been reading through your posts for a few weeks now. I can't believe it's taken me so long to discover asexuality but, probably for the first time since adolescence, I feel like I'm not a freak - or that if I am, at least I'm in good company;)

I must know ... did you go to the Globe Theatre?

I have spent 11 days in London, and saw 11 theatre shows there, so finding something to do at night was generally not a problem for me. Another thing to do at night - go to bed early. This makes it possible to wake up early and beat some crowds in the morning.

@Em: Thanks! And I'm glad that you discovered asexuality :)
At times in London, I worried a little about safety, but there were usually a lot of people walking around even late at night, so that made me feel safer. Also there were many signs about mobile-phone theft, but I didn't have a phone!
I didn't stay in hostels, but I did stay mostly in a college dorm and a B&B (although they didn't give me breakfast, so I guess just a B?) I didn't meet anyone there though. The other people staying in the dorms were mostly in huge groups, which didn't help.

@Sara: I didn't make it to the Globe, although I did see the exterior. But I ended up seeing a few good shows at other theaters. They were doing Richard III which I wanted to check out but I didn't get around to it. Hopefully I'll go back soon :)
Agree that beating crowds is very important! Especially if you're traveling in summer.

I ~love~ traveling by myself. I decide when and what to eat! I can sleep late or go to bed early! I can go to the lapidary museum and have a fabulous time and NOT HAVE MY FAMILY MOCK ME FOR IT!

I traveled with a group to London one year. We were there for a month, and while they were doing a big class thing and seeing big shows (I had already don the class a couple of years before), I went around and saw alternative and fringe theatre shows by myself. It was one of the most interesting and amazing experiences of my life. Since then, I have traveled alone, mainly in Europe and the United States. It is not always perfect, sometimes lonely (I'm such an extrovert though and tend to talk to strangers), but mostly a great time to do things that I like without trying to impress or appease anyone. I am also a woman, which poses it's own issues, but I have never had any problems, even while having a pint in various pubs across Ireland! (though a single woman should really never get drunk...)

I love your list because it really reminded me of my experiences and how amazing they have been!

I like to do what I want to do, so it is best, that I run my own travel show. I do talk to people, whereever I go, and I am very outgoing. I want to take a cruise, but I do not want to share that small space, and i love sleeping alone, and using my own bathroom. I have traveled with husband and daughter. I cannot take 24/7 with anyone, but myself!

I talk to people when I vacation, but I prefer to have my room to myself.

Great post, thanks.
What I do at night, even when travelling with my husband rather than alone, is drop the photos from the camera/phone to the laptop that I WILL have with me, do any required post-processing, and upload them to Flickr. Possibly blog the result.
So, another precaution: do your best to make sure you have internet access wherever you're staying. That lets you research where you and where you're going, book the next place to stay, all sorts of essentials.

@Jane: Thanks! Bringing a laptop was really helpful, although since mine is pretty old, it was heavy to lug around. I didn't have a phone, so I had to communicate with people I was meeting with online. I had to rule out any lodgings without wifi, although at some places you have to pay extra for it.

Thank you for this post. I am a very socially isolated (by choice) person, and I intend to spend the rest of my life travelling, specifically so that I can be alone and avoid others' attempts to 'connect' with me. I found your post very inspirational. Also, I love your graveyard pic. Graveyards have always been my favorite places to be, because dead people can't bother anyone.