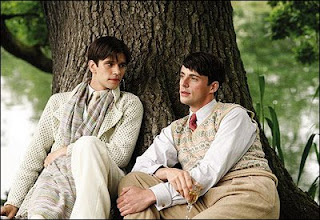 (Oh, prewar Oxford! No homework, ever, just champagne-drenched picnics involving linen suits and verdant rivers.)
Back in this post from October, there was a bit of discussion about Brideshead Revisited, a novel that has spawned a few film adaptations. I'd had the 2008 film on my Netflix queue for a while, and it finally arrived this weekend. Disclaimer: I haven't read the book or seen the other films, so I can only talk about this particular film on its own merits. First of all, let me just say: I don't know if I've ever seen two more similar films than Brideshead and Maurice. Similar basics to the story, very similar look and feel. Like Maurice, Brideshead is about two young men attending Oxford at the beginning of the 20th century; one is wealthy and the other from modest means. They become involved in an intense, romantic friendship, but grow apart when one of them prioritizes a relationship with a women. As double-features go, it would be long, but might also inspire some good discussion (if you're not too tired to have it).

One of the more interesting scenes of Brideshead was when one of the leading men, Charles, goes to Venice with his aristocratic pal, Sebastian, and Sebastian's sister, Julia, who Charles later falls in love (or, I would argue, lust) with. An Italian woman advises Charles that their "English romantic friendships" can easily get out of hand, and that it would be a bad idea to let the friendship last too long. She says it's obvious that Sebastian is interested in Charles as something other than a friend. Charles seems to brush off the comment. It seems that Charles is more charmed by Sebastian's opulent and exotic life than by Sebastian himself.

While I couldn't read Sebastian as asexual by any stretch of the imagination, I think many asexuals would be able to relate to the frustration he feels. While Sebastian can have any material thing he wants, he can't seem to maintain the relationship he desires most. His bond with Charles is something that they're encouraged to "grow out of". Sebastian is very childlike in some ways, and his relationship with Charles doesn't seem all that multi-demensional. We see a lot of them drinking, running around the moors, and swimming naked in fountains, but not a lot of evidence that this is anything but the friendship equivalent of a summer fling. However, it's obvious that Sebastian envisioned it differently. When he discovers Charles and Julia kissing in an alleyway in Venice, I really felt for him. I saw it as a moment where Sebastian might have realized that the new world of adulthood was leaving him behind. While he'd always been a heavy drinker, it seemed like he turned further to alcohol to dull the pain of the disconnect between himself and those around him. An asexual of that time period would have been lucky to be in his situation: He wasn't being forced to marry. However, in a society providing a limited amount of social roles, he had no clear place.

What's odd about the film is that the storyline involving Sebastian is compeltely abandoned. True, Charles is the main character and the movie is about his development (or lack thereof). However, we leave Sebastian dealing with an illness, and we don't even know if he's still alive by the end of the movie. Rather than being about Sebastian and Charles's relationship, the movie seems to really be about Charles's impressionability, followed by his ruthlessness in getting what he wants. It's one of those stories that you know from the start just can't end well.
Posted by Ily at 2:15 PM

This is kind of funny, because I'm in a class about British homoerotic literature, and we've read both Maurice and Brideshead Revisited. I have my complaints about the class, but one thing I can say is that I've learned a lot about how the idea of sexuality has developed over time. So, I haven't seen the movie, but I'm going to talk about the book.

First, Brideshead Revisited was written by a Catholic, and was meant to have a "happy" ending. I put happy in quotes because the happiness of the ending really depends on religious ideology. No, Charles didn't end up with Sebastian, but he found (Catholic) Jesus! Yay?

Second, Brideshead Revisited was written after Maurice, but before Maurice was published. The authors ran in similar circles, so it is possible that Waugh had read Maurice and alluded to it on purpose. There are hints in the novel, particularly in scenes involving gardens.

Third, the British idea of sexuality (at the time) was a process. Boys went to all-boys schools and were expected to have sexual relationships with other boys their age, which they then "grew out of" so that they could get married. If you're interested in reading more about that, I'd recommend Foucault or Sedgwick. Some other books alluded to in Brideshead (which you might be interested in reading, if you haven't already) are The Picture of Dorian Gray and Against Nature.

Connections, what what! From what I've read, the same was true for girls...but without the sexual component.