Maybe what I'm about to say makes me a huge hypocrite. But isn't that what being honest with yourself is all about-- admitting your dishonesties as well? In this literature, I wrote that A-s wouldn't necessarily die alone. And when talking about all A-s, I'm going to stand by that, because I can't speak for anyone other than myself. If you asked me in person, I would also stand by that, because let's face it-- it's what I have to say. I'll say almost anything to convince you that this is my orientation and not a disorder. But "dying alone" is like the Loch Ness Monster. Everyone's heard about it, but how many of us really know what it is? That's what I'd like to talk about today.
Now, the more logical part of me thinks that "dying alone" is just a paranoia. That, like large spiders crawling over your face in the dark, it's a frightening possibility that really happens to very few of us. Some of my phobias include cults and falling into a porta-potty. Will I ever join a cult or fall into a porta-potty? Probably not, but whenever I use a porta-potty, or hear anyone talk about a certain fruity powdered beverage, I freak out a little.
"Dying alone" might be the same; just an apocryphal legend that, like so many other things, is designed to scare young people into marrying. Sometimes I have bad days and I feel, in some primal part of me, that "dying alone" is real and will happen. By being in the 1% club, I've already beaten the odds in a major way, and maybe, I think, it's just not possible to beat them again. But if I see "dying alone" as just a phobia and not an eventuality, I feel better. Hell, it's not even a cool phobia. Unlike my other phobias, which are truly terrifying things that I would be honored to be afraid of, "dying alone" seems impotent in comparison. 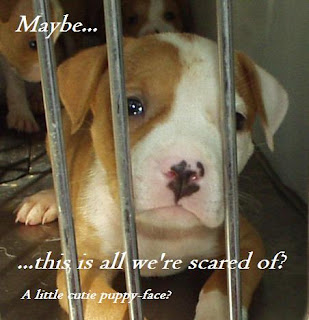 I'll leave you with a last example: I used to be really scared of dogs. So I decided to volunteer at an animal shelter and walk the dogs, mainly huge pit bulls, Rottweilers, or mixes of the two. In the beginning, I think everyone's a little scared of the pit bulls. But you find that most of them are actually very loving, gentle animals when they're not trained to disembowel people. So don't avoid the dogs (unless they're foaming at the mouth), and if you're scared of "dying alone", don't try to put it out of your mind. When we do that, I think it just gets even more embedded in our psyche. Let's bring it out into the light. Let's talk about this, because when we do, we diminish its power. Or, just ask someone: "I don't want to die alone. Will you die with me?" to see what a bizarre concept it truly is.
Posted by Ily at 12:20 PM

Email ThisBlogThis!Share to TwitterShare to FacebookShare to Pinterest
Labels: Theorizing

This topic is something I wonder about every now and then, and honestly, I really can't think of any solution.

Part of me is scared to death of dying alone. While I'm somewhat close to my family, I feel like they don't really understand me. I don't have any really close friends, and the ones I do have are scattered across the country and I don't really get to see them much.

Part of me thinks trying to find a significant other is too much trouble and not worth it, but another part of me desperately wants to find a soulmate, although I don't know how or where to even begin to look.

Dying alone is definitely something that's always at the back of my mind, although I try to ignore it as much as possible. I know that may not be the healthiest thing, but if I keep dwelling on it it'll drive me insane.

In a way I think everyone dies alone, anyway--even people that have spouses and significant others and children and lots of friends and family members. I know of a few situations where someone's spouse has died, their children are grown and living in another part of the country, and although they have people that care for them, they end up dying alone, anyway.

I wish I had some sort of...something to make me feel better about this, but I really can't think of a way to cope other than trying to push it out of my mind as much as I kind. Like I said, I know it's probably not the best way to handle it, but I'm not sure what else to do.

Hey, thanks for coming over! And I totally feel what you're saying. "Dying alone" is one of those things that I've pushed down so far into my semi-conscious, I'm not even sure if I think it or not anymore. But I'm trying to take it out and poke it with sticks, hoping that this will make it go away. Which I guess makes me feel worse in the short-term, but ideally, I'd feel much better when the stick-poking is all over. It's really a big experiment. I'll let you know how it goes... :-)

Of the fears I indulge in (and I indulge in quite a few) dying alone has not surfaced. Oddly enough, I'm more afraid of being with the wrong person than I am of being without anyone, which is ridiculous since I have been sort of trapped in serial monogamy since I was 15 (sometimes not perfectly monogamous either . . .).

I have met a lot of people who worry that they will never find "the right" person, and that hasn't troubled me. Am I total freak?

And what is so terrible about living out your final days surrounded by cats and knitting? Hell, that's basically my life right now and I love it. :)