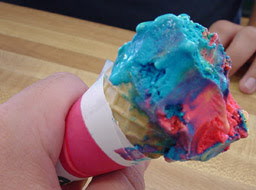 [Photo: Food coloring with a side of ice cream. 15-some-odd years later, and I still think it looks delicious. Read on and you'll get the point...]

There's a little debate going on right now on AVEN about whether or not we should have a personals forum. I completely agree with those who say that we need to keep AVEN about visibility and education. I don't know how many people are actively involved in these activities, but I know the number is low. Spread us out all across the world, and it gets even lower. I'd think that people would be chomping at the bit to get a piece of the new sexual revolution. But, as you can tell by my frequent SF meetup dilemmas, this is not the case. Maybe in people's secret hearts, they don't want to educate people about something that they feel has caused them to be alone. I don't know if personals will work, but let's pacify these people. Let's make them happy, because lord knows, we need it.

That's my official stance. But my personal stance (no pun intended, I hate puns) is not as clear-cut. In fact, my ideas on "romance" and "relationships" have never been clear-cut. As long as I can remember, I have visualized getting married. But whether this is what I really want, or simply a consequence of watching too many movies, I can't say. Being in a "romantic relationship", whatever that means, is something I've always wanted to do as well. I don't know if I have any romantic drive. It may just be something on my life's to-do list, somewhere between raising a giant tortoise and seeing the Grand Canyon.

Maybe by having personals on AVEN, we're contributing to the system that we're trying to dismantle. But I think one of the reasons why asexuals can seem so lonely is because people are constantly shoving unrealistic expectations of romance down our throats. Like those chili cheese fries or tie-dye ice cream that your parents never let you eat, romance has a similar appeal to me. It seems great because I've never tried it; I don't think about the stomach ache that ensues. What person with a zest for life does?

Even though Voltaire seems like a tool, I have to agree with at least one thing he said: "Try it once and you're a philosopher. Try it twice and you're an alcoholic." Although I might not go that far (if two tries gets you on the floor, don't drink), like any philosopher, I want to try everything. You know, if only for research purposes. But I don't want to do anything stupid, and I don't want to be one of "those people" who would rather have any relationship than be by themselves; that's not me at all. I want to experience what the 99% is able to. I also want to be myself. This, my dear friends, is the problem.

Even if we had AVEN personals, what would the success rate be? Everyone knows the stories of the happy couples that have met on AVEN; we all know them because there are so few of them. I don't want to date like sexual people do. But I don't know how asexual people date. No one does; It's like the giant deep-sea squid of love. And that metaphor might be more apt than you think, because whenever I think about "relationships", I kind of feel like this: 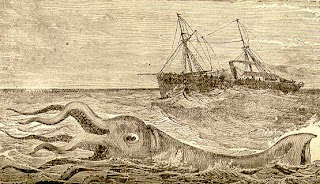 All I know is that the rules, if there are any, are ours for the writing. Do a clicky on the little link below. The comments section is all yours.
Posted by Ily at 7:33 PM

don't worry about it...most relationships are more trouble than they're worth and the stomach ache that enuses is pretty god-awful and this is coming from someone who has had a lot of experience with stomach aches (the non-metaphorical kind) ;-)

Thanks for the comment, homedog. Now I'll ask you a hard question, because this is what we do here on Asexy Beast:
Do you really, in your heart of hearts, believe that? Don't you want to give it another try at some point? If it's not worth the trouble, why keep doing it?

Possible asexual sighting?
http://en.wikipedia.org/wiki/Robin_Symes
I'm reading The Medici Conspiracy at the moment--send me an email, and I'll give you the relevant passage that made me wonder.

Whoa, what a weird character! I e-mailed you at your g-mail address...

I think you've really hit on something when you say that a lot of asexuals feel like it's 'something that's kept them alone.' All I really want is good friends, and I know for a fact that platonic good-friendships exist, but there aren't guidelines for plotting a social path as an asexual, and I sort of feel as though I've fallen off the rails.

Ah, Anon...what can I say, but that I feel you on that? I wish life came with instructions...maybe all the instructions are located in a secret cavern somewhere below Ikea...

to be honest, i've forgotten the point because the pain makes you forget how good things might have been....since most relationships won't last forever, is it worth all the pain along the way to try and find the right one? i dont know anymore...

Oh Mads, I wish I knew. It's true that most relationships won't last forever, but maybe we can take comfort in the fact that at least ours will? From the womb to the tomb, rizzight?